Here is an interview with Stephen Spignesi who has listed his favorit 101 King works in the new book The Essential Stephen King.

Hi Steve. First, let me thank you for doing this interview! I have just read your book and let my start with telling you that I really liked it a lot. It's a very informative book! OK, on to the tough questions...

Lilja: Where did you get the idea to this book?

Stephen Spignesi: The idea came to me in 1997 when I was working on my book The Italian 100 (which came out in 1998). The Italian 100 is a ranking of the most influential Italians and Italian-Americans in world history. It occurred to me at that time that Stephen King was probably the only author about whom a similarly-constructed book could be written, because, first he was popular enough and respected enough for such a book to be a valid commercial venture, and second, and most importantly, his body of published work - currently numbering close to 600 individual pieces - made possible the idea of picking and ranking his top 100.

Lilja: How did you researched for this book? Did you read all of King's work again or did you already know them by heart? 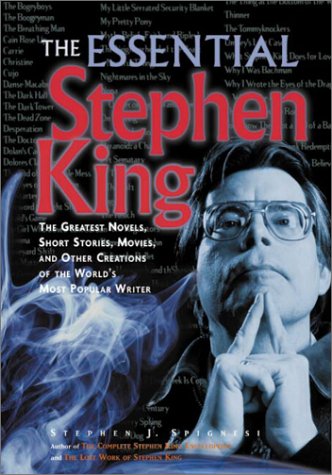 Stephen Spignesi: I reread a great many King works while researching this book, but not his entire body of writing. Since I am really familiar with his work, I did a lot of browsing through novels and short stories to refresh my memories of each piece and see if my recollection of the work agreed with what I thought of it now. I rediscovered some wonderful pieces and was consistently impressed with how some of King's older works, such as The Dead Zone and 'Salem's Lot and The Shining and others - stood up over the years. In fact, four of my picks for King's top 10 works were published in the 1970s.

It was also very interesting to me to find that the Top 100 took shape in a very structured way. I ended up ranking his novels highest on the list, followed by novellas, then short stories, then nonfiction essays and articles, and I think that reflects King's strengths in a very revealing way. He is at his best with the novel form, followed by the novellas, then short stories, etc. I did not deliberately place works in these specific areas: The list just took shape that way.

It was difficult to leave things off the list, but I was limited to 100 slots and, thus, had to be ruthless. Home Delivery comes to mind. I love the story but would have had to eliminate something that I thought was better in order to include it.

But this is all so subjective and I would never be so arrogant as to state that this is intended to be the carved-in-stone ranking of King's 100 greatest works. This is my opinion and my sincerest hope is that it will start a dialogue among fans and also spur some heavy re-reading.

Lilja: It's a rather bold book to write. I guess that almost every King fan will disagree with you on some of the entrees, right? Have you gotten any mails/letter about it, and if so, what was the tone of those letters?

One fan was livid that I ranked My Pretty Pony as high as I did; another could not believe I even included The Ten O'Clock People on the list. That said, though, I think that most fans will agree that the list in its entirety is a pretty good snapshot of the Best of King.

I think that if you set out to read everything on my list, you would, indeed, experience the "essential" Stephen King. And that was my intention from the start. 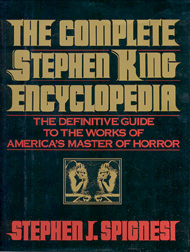 Lilja: Did you, when you wrote The Complete Stephen King Encyclopedia, know that you would do a trilogy about King? Was that the plan all along or was it something that you realized as the time went by?

Stephen Spignesi: Back in the mid-1980s, when I started doing the research to write The Complete Stephen King Encyclopedia, it occurred to me that I would like to do three major books about King. (My two Stephen King Quiz Books were spin-offs of the Encyclopedia and I did not include them in the total.) But conceiving that idea was the extent of my commitment to a trilogy. I wasn't sure if I could do three books about King that would meet the criteria that I had set for myself, which consisted of the following: The books had to make a contribution to the body of scholarship about King's writing; they had to be personally interesting to me to research and write; and, finally, they had to be something fans would want to read.

I did not publish another book about King until 1998 when I did The Lost Work of Stephen King because I felt that this was a truly unique idea and an interesting way of looking at King's work that had not been done before.

Lilja: In the book you mentions that this is your last King book. Is that really the case? If it is, why? Do you feel that all that needs to be said about King and his work has been said? Have you gotten tired of writing about King?

Stephen Spignesi: I haven't gotten tired of writing about King, but there are so many other subjects that interest me, I felt the time was right to move on.

I have ideas for a major books about the American presidency, as well as a book about the Catholic Church and their role in the Inquisition, plus I am writing a nonfiction memoir about my father called Time Comes in Colors, which is requiring quite a bit of early 20th century research.

With all these interests, I decided I have said pretty much everything I have wanted to say about King's work and will now focus on other books, and original screenplays.

Lilja: You have written a lot of non-fiction books. Have you ever thought about writing a fiction book? And if you ever did, what type of book would it be? Horror?

Stephen Spignesi: I have a novel in the works called Shelter Street, which might be described as a contemporary drama with elements of fantasy, plus a couple of original scripts that I have been working on, but, for now, nonfiction pays the bills.

Lilja: I read in the book that you have your own publishing company, The Stephen John Press. Tell me a bit about it. What have you published? Personally this was the first time I ever heard about it.

Stephen Spignesi: The Stephen John Press is about five or six years old and is an imprint I started to, first, do short print runs of other writers' books, and second, allow me to self-publish limited editions of my own works more suited for small distribution than trade release.

The first book the SJP published was a feminist autobiography called Open Windows, which did very well.

The next confirmed book on the schedule is my own book, The Overnight Hours: Poetry & Prose, which is a collection of my poetry and a couple of short stories and novellas.

I am also in talks with a couple of other writers about doing their novels and am also considering putting together a themed anthology with contributions from several writers.

But The Stephen John Press is something I can only work on in my very limited spare time and, thus, there are great periods of time between publications. I enjoy it, though, and do hope to expand its catalog over the next several years.

Lilja: Since you now have ranked all the stuff King has written, could you rank your favorite 5 King adaptations for me?

Stephen Spignesi: Five is too limiting, but I will give you my top 10 (in no particular order). The Shawshank Redemption, Misery, Stand By Me, The Dead Zone, The Green Mile, Paranoid, The Shining (Kubrick's), The Woman in the Room, Dolores Claiborne, oh, and Maximum Overdrive (could not leave that last one out, right?).

Lilja: Is there anything by King that hasn't been adapted that you feel really deserves adapting?

Lilja: What is next for you now? I understand there will be a book about cats, right? 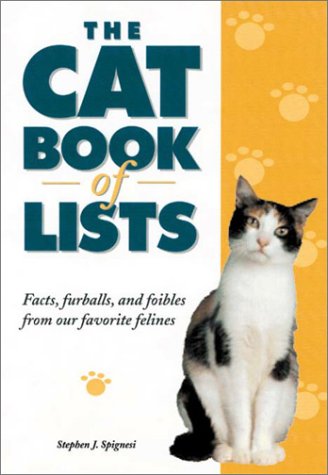 Stephen Spignesi: This Fall (2001) is The Hollywood Book of Lists and The Cat Book of Lists as well as the "complete & uncut" limited edition of The Essential Stephen King (from George Beahm's GB Books imprint).

I am also planning on finishing and publishing my aforementioned book of poetry and prose, The Overnight Hours, within the next year.

In the talking stages with two different publishers are books about George Washington and Abraham Lincoln.
Also making the rounds is a script (best described as a "pop culture fantasy") that I co-wrote with my friend and editor Mike Lewis called Pilgrim's Landing, and Mike and I are currently writing our second screenplay, called The Doctor.

I also have a stalled novel, Shelter Street, that I would like to get back to one of these years, too.

Lilja: Thanks so much for letting me do this interview. Is there anything you would like to add that you think my readers would be interested in?

Stephen Spignesi: Only that I think that you, Hans-Åke Lilja, do a terrific job in keeping King fans around the world up-to-the-minute informed, and that your site, Lilja's Library, is a goldmine of info for all of us fellow King lovers. It is so obvious that your interest in King and your excellent work on your site is a labor of love and I want you to know that we all appreciate your efforts.

If you want to read my review of The Essential Stephen King it's now available online. 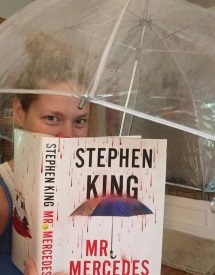