Here is some news about a remake of Christine


Stephen King's hellbent '58 Plymouth Fury, Christine, is back in the shop for some modern retooling, no secret there. However, who are the creative mechanics working under the hood? Word trickled over to us that Disturbia co-writer Christopher Landon may be flirting with the project. In talking with him one-on-one about his latest Dreamworks thriller (he shares screenwriting credit with Carl Ellsworth), Landon was hesitant to delve deep into the subject of a Christine remake, but he did confirm his possible involvement.

"['Christine'] has been all over the place," he says, alluding to the property's travels as a rumored SCI FI Channel Original to Sony and NBC's plans to turn it into an event telepic. "If it happens or not we'll see, but when I came in what I wanted to do was really go back to the book, the source material. I'm a fan of the Carpenter version, it is fun. But the book was much more of a possession story than it was just a killer car. That's what made the book so great is that what was so terrifying was that it wasn't just about an inanimate object running around and killing people, it was a boy who was sorta being taken over by the former owner of the car - and there was something more terrifying about that. Also, I just love the dynamics of the characters and so forth. Right now it's way too soon say anything else about it. We're so in the thick of deal-making, I don't want to blow anything else!"

Fair enough. King's original 1983 novel was turned into a John Carpenter film that same year starring John Stockwell (director of Turistas), Keith Gordon ("Dexter") and Alexandra Paul ("Baywatch"). Not long ago, a remake of the film was announced along with an update of King's Pet Sematary. 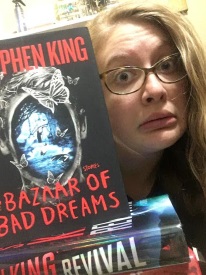