Report from The Dark Tower panel

The Special Events Hall at the 2007 New York Comic Con was filled to capacity for the Marvel Comics “Dark Tower” panel on Saturday afternoon. And the man everyone was there to see was the last to take the stage. Marvel EIC Joe Quesada moderated the panel, and introduced artist Jae Lee, Robin Furth, Peter David, Ralph Macchio, Richard Isanove and Chris Eliopoulos. Quesada then welcomed to the stage “one of the greatest creators of the last 50 years, maybe ever,” Mr. Stephen King. The vaunted novelist took the stage to thunderous applause, and a standing ovation, and a pair of Imperial Stormtroopers were forced to keep order with the mountain of photographers. “If you keep calling me Mr. King, I’m gonna kick your ass,” King warned Quesada.


Read all The Dark Tower Comic news
To the news archive 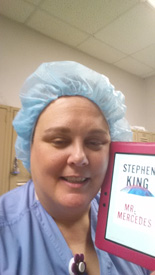