The Ghost Brothers of Darkland County

Mellencamp talks about The Ghost Brothers of Darkland County:


Mellencamp will also spend time with author Stephen King polishing "The Ghost Brothers of Darkland County," the "play with music" that they've been working on for the past several years. The two got together in November to continue putting it together, and Mellencamp says "that's really another reason why I'm not gonna be on tour this summer, 'cause I'm pretty sure I'm gonna be ... working on this musical," including meeting with potential producers and investors.

"Steve is the sweetest guy you could ever meet; there's nothing weird about him or demonic or anything like that," Mellencamp says. "I remember once we were playing in Green Bay, Wisc., and he came out and played acoustic guitar on a song. I went back to get him, and his hands were shaking. I said, 'You gotta be sh*tting me -- the man who scared the world is scared to walk out in front of 10,000 people?!' He said, 'Yeah, I'm f*cking afraid!' I said, 'Get your ass out there!' He's just the sweetest guy, and he's great to work with." 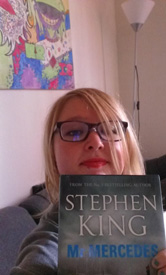