Here are the titles and descriptions of all 10 episodes for Mr Mercedes. Please note that they do contains spoilers...


Based on the novel by Stephen King. Two years after retiring, former homicide detective Bill Hodges is still haunted by his last case. When the demented culprit begins to torment Hodges, he embarks on a crusade to bring the killer to justice.

As Hodges struggles to maintain his sanity, both Pete and Ida take notice. Deborah worries about Brady, who gives her a window into his latest work. Hodges connects with Olivia Trelawney's sister Janey, who hires him as a private detective.

Hodges and Janey dig deeper into the circumstances surrounding Olivia's death. Hodges uses Debbie's Blue Umbrella to turns the tables on Brady. Jerome's father intervenes in his relationship with Hodges.

Ida is hurt as Hodges and Janey's relationship intensifies. Lou is disturbed by an interaction with a customer. Deborah takes Brady to the cemetery and the two reflect on their difficult past.

The cat and mouse game between Hodges and Brady escalates. Hodges has an upsetting conversation with Janey's mother. Deborah's drinking almost causes an accident at the Hartsfield home.

Hodges struggles with the past as it concerns his daughter, Allie. As Deb attempts to make a change for the better, Brady interferes. Robi continues pressuring Brady to impress their bosses. Hodges connects with Janey's niece, Holly.

As Hodges helps Janey through a difficult time, their connection deepens. Realizing he still needs their help, Hodges brings Jerome and Holly back into the investigation. Deborah confronts Brady with her concerns.

A critical error puts Brady in the center of a crisis of his own making. Holly and Jerome make a pivotal discovery. After a tragedy sends Hodges reeling, he goes to visit his daughter, Allie.

Jerome and Holly tell Hodges their concerns about the Mercedes Killer. Tensions continue to escalate between Brady and Robi. As details about the investigation emerge, Hodges, Pete, and Izzy close in on their suspect.

When another murder victim is discovered, suspicions about Brady are confirmed. As the police prepare for another massacre, Hodges fears for the safety of those he loves. 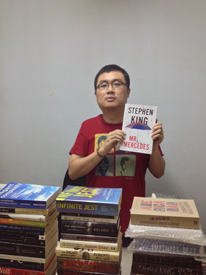