Interview with Owen Teague who plays Jordan in Cell.


Jordan: a 12-year-old-boy studying at prep school that was devastated by the Pulse, Jordan faithfully remains with the headmaster, Charles Ardai, until they destroy the flock at the school and Ardai is driven to suicide by the phoners. Jordan remains with the group and provides the intellectual theory and comparison of the effects of the Pulse to that of a worm in a computer.

Here is a part of the interview.

Colleen Bement: What can you share about your experience making the upcoming film Cell?

Owen Teague: Cell was an amazing experience. That was my first time working on the set of a movie like that; heavy on stunts, special effects, blood, and science-fiction-horror stuff. Working with John Cusack and Samuel L. Jackson was incredible. Both are really intense and made that terrifying world feel real. Stacey Keach was also amazing to work with. The whole thing was kind of surreal, because leading up to getting involved with that movie, starting in middle school, I had become obsessed with everything Stephen King. He’s one of my favorite authors. And so actually playing one of his characters, and saying his words, and being in a movie he was so closely involved with was just insane. Especially a film with such amazing people working on it. And the other thing was that while we were shooting it, a movie about a kind of apocalypse, we got hit with this horrible, freak snowstorm in Atlanta. I think they called it “snowmaggedon.”The crew got stuck in the bar where we were filming for like two days. So there we were, making this movie about four people in the middle of the end of the world, and outside, people were stranded because of a giant snowstorm. Other than that though, it was a great experience. 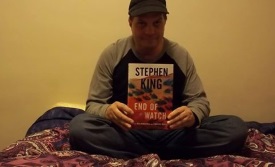