OK, 2012 is almost over and about a year ago I set up six goals for Lilja’s Library for 2012 and I thought it was about time to see if I lived up to them. So, here we go.

Goal 1) I hope to do at least 5 cool interviews for you. Don’t know who yet but I have my sight set on some specific people…

Outcome: I did seven interviews during 2012.

Goal 3) I hope to get at least 15,000 followers on facebook. I know it’s a lot (twice what I have today) but you have to set your sights high, right?

Outcome: As predicted it was a hard goal to reach. Today I have 13,670 followers so this goal was not reached.

Outcome: This goal was, as predicted, even harder then goal 4 and today there are only 2,789 so this goal wasn’t reached either.

Goal 5) I will keep reporting the latest on King for you and hopefully deliver what you want when you want it.

Outcome: I think I did a good job but this one is really up to you to say…

Goal 6) Finally get the new section at Lilja’s Library up and running. I can’t say what it is yet but it has to do with movie props…

Outcome: Marv’s Museum is now online and if I may say so myself, it looks pretty cool! 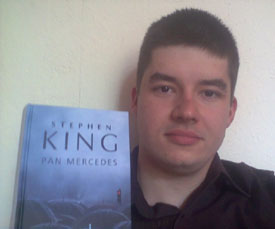