In case you missed this documentary about all things Carrie here's all you need to know about it from it's creator Michael Stever.


'Resurrecting Carrie' has hands down been one of the most difficult things I've ever filmed & edited together. First and foremost because I was attempting to 'merge' so many facets of Carrie into one rather short piece no less. I wanted it to be a retrospective of both stage productions, because honestly the creative team really has improved on the source materiel by leaps and bounds. But also because I simply had to show viewers Betty Buckley & Linzi Hateley's jaw drop scary rendition of 'And Eve Was Weak.' Of course the piece also had to incorporate the film not merely because it is hands down of the most visually spectacular pieces of cinema ever created, but because the wonderfully complex Piper Laurie was on hand, and not only agreed to sit down with me on camera, but then gave me over three hours of her time. I'm still pinching myself. I wanted the piece to incorporate the book, as Stephen King and the original source material, (not to mention his book's seemingly tenuous beginning phases) are the inspiration for everything else here, I wanted it to have a focus on bullying, as this is a blisteringly relevant social issue, and goes hand in hand with equality, one of our country's more divisive, controversial issues ever. What's more, I purposefully chose not to create an outline before hand, and let me tell you for the three months I spent working on this, it left me on more than one occasion sitting at my computer scratching my head wondering how in the Hell I was going to piece it all together effectively. What's more is I still have tons of material which didn't make it into the final piece, as again, I felt I was trying to incorporate so much already - I had to stick with certain specific variables. So now what do I do with the wonderful footage of Piper talking about how Sissy Spacek's husband Jack Fisk just happened to catch sight of her in rehearsals illuminated in the archway of Brian DePalma's apt with her hair down & combed out and was stopped in his tracks. "There!" he yelled.. That's how you should have your hair! "Initially I thought the character of Margaret White was quite stereotypical, and cliche" recalls Laurie. "But Brian really let me have free reign with Margaret and go into some very risky territory." What do I do with the footage of Piper talking about how DePalma actually let her and Spacek do their final 'stabbing scene' completely unrehearsed? These are all amazing moments which I simply couldn't ad to the piece, because I just thought it would distract from the focus I thought I had to stick to. Perhaps I should do this piece in chapters? There's an interesting idea.. Am not sure. All I know, is as my devotion to Carrie reaches far past the book, far past the film although Brian DePalma's cinematic masterwork still sends chills down my spine, and I'm sure will continue to do so till the day I die. One day there is going to be an incarnation of 'Carrie The Musical' which leaves audiences breathless. I can't wait when that day comes. 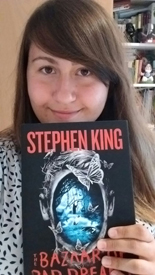