Romero turned down The Walking Dead

Zap2it had a chat with Romero where we told them he turned down working on an episode of The Walking Dead and hasn't even seen any of the episodes.


George Romero, who pretty much put movie zombies on the map, says he doesn't really get the hype about the super-trendy creatures. And, in fact, he's never watched one episode of AMC's "The Walking Dead," although he's hosting the network's "FearFest" which kicks off Sunday, Oct. 16, with the show's season 2 premiere.

"I haven't seen any of the episodes," Romero tells Zap2it.

And not only has he not watched the show, he tells us he turned down an offer to work on an episode.

"Frank [Darabont] and [Greg] Nicotero were calling me and asking me to do one of these," he says. "I don't have any desire to do one because it's not -- my zombies live in sort of my universe and they're political and they're different from whatever that is."

He continues: "I'm not trying to capitalize on a trend. When I want to write about something, I try to use zombies to do it because it's easier than trying to write a piece about citizen journalism. It's easier to put zombies in it and make fun of it."

Is he just sick of zombies in general?

"I'm not really a fan of the fact that they've become as popular as they've become because I used to think that I had them in my pocket somewhere," says Romero. "And now they're sort of all over the place and I'm not thrilled."

Judging from the success of The Walking Dead and the not so big success of Romero's last Zombie movie maybe it was a mistake to not work on The Walking Dead? What do you think? Comment on facebook.
Read all Non-King News news
To the news archive 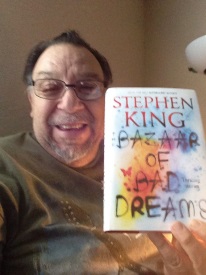