US TV reports that King is supporting Haven.


Haven producer Shawn Piller has revealed that Stephen King is supporting the project.

The upcoming Syfy series is based on King's novella The Colorado Kid and Piller explained that the author has been heavily involved in the adaptation.

"Stephen King has been very supportive," he told TV Squad. "Because of our experience with The Dead Zone and how we treated that project, and because of him being a fan of Lost and those type of shows, I think he was excited about this little novella he wrote being turned into a series."

Piller added: "He's approved every step along the way. If you're offending a writer, you're doing something they wouldn't do. And if you're p*ssing off the writer, the fans aren't going to like it."

However, cast member Emily Rose explained that the show does not stick to the book completely.

"We're not taking The Colorado Kid 100% literally," she said. "We're using that world as a greenhouse for all these other stories to take place. King created the stage on which we perform."

Thanks to Bev Vincent.
Read all Haven news
To the news archive 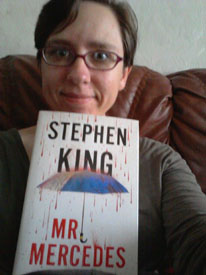