King has now commented on a sequel to The Shining:

On the heels of the news that best-selling horror master (and EW columnist) told the audience at a Toronto book signing that he was considering writing a sequel to The Shining, King tells EW.com that he’s got no immediate plans to revisit the character of Danny Torrance. “It’s a great idea, and I just can’t seem to get down to it,” says the author in an e-mail. “People shouldn’t hold their breath. I know it would be cool, though. I want to write it just for the title, Dr. Sleep. I even told them [at the book signing], ‘It will probably never happen.’” Still, King — whose most recent novel is this month’s Under the Dome — can’t quite shut the door on the Shining sequel, adding, “But ‘probably’ isn’t ‘positively,’ so maybe.” 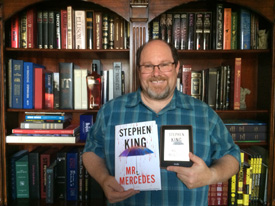