Ain't it cool news reports that Eli Roth has signed on to do a movie of King's short story 1408. Here is what they said:


He’s featured in the new PREMIERE as one of the saviors of horror cinema, he just signed to adapt Stephen King’s short story “1408” for Radar Pictures (a great gig, since that story gives a filmmaker all sorts of incredible opportunities), and just yesterday, we reported on his collaboration with Richard Kelly as they both adapt Richard Matheson’s “The Box.”

The movie was also mentioned in Fangoria.

“I’m also adapting a Stephen King short story called ‘1408,’ which I'm really excited about,” Roth continues. This tale, issued as part of the BLOOD AND SMOKE audiobooks read by King himself, is about a true-horror author spending the night in the titular haunted hotel room, where over 30 people have supposedly died. “King has been my favorite author ever since I was old enough to read, so to adapt one of his stories into a feature film is a true honor. I will write and direct it, and Lorenzo DiBonaventura, who used to be the head of Warner Brothers, will produce it.”

Thanks to 'Bones, Linda and Bev Vincent.
Read all 1408 news
To the news archive 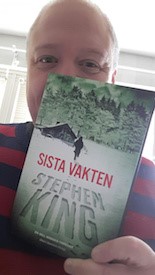