Here is a thank you from King for all the entertainment experiences he asked for earlier:

Thanks so much for sharing your worst entertainment experiences. Not only did I get a great Entertainment Weekly column out of it, I almost laughed myself into cardiac arrest. I know that on one level it’s dreadfully mean to laugh at the misfortunes of others, but on another level…let’s just think of it as “identification and sympathy,” okay? It was great.

And speaking of Entertainment Weekly, I saw a great movie last week called Jumper and I can’t write about it for them because the executive producer also happens to be the guy who got me the EW gig. It would look like log-rolling. Probably this does, too, but I don’t care. It was the fun movie I hoped for last summer when Transformers opened (the only pic I walked out on all year; it offended even my low standards). Jumper is about a picked-on teen who discovers he can teleport. So if you’ve ever wondered what it would be like to eat lunch on the head of the Sphinx, or take your girlfriend on a make-out expedition into the catacombs below the Roman Coliseum, this is the movie for you. You may have also wondered what Samuel L. Jackson would look like in a 1940s-style bathing cap. If so…check out the ’do.

Now you’re probably wondering, Uncle Stevie, how much did you get comped for this? Answer: not a penny. I’d tell you I liked this movie if Hugo Chavez was an executive producer. (Come to think of it, I’ve never seen Hugo and my pal Ralph in the same place, so maybe…) Aw heck, think of this as my little Forry Ackerman turn and go see the darn movie.

Plus…thanks again for having so many weird experiences. I loved em. 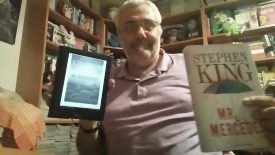