When I wrote the review for the book Everything's Eventual I states that All That you Love will be Carried Away was one of the weaker stories in the book. The same goes here. All That you Love will be Carried Away is this collections weakest story, even if it's far from bad. Peter Gerety does a really good job portraying the suicidal Alfi, but the story in itself is rather week if you ask me. Peter Gerety also read one of the roles on the audio edition of From a Buick 8.

The same goes for my favorite reader of audio books, Becky Ann Baker. In From a Buick 8 she reads the role of Shirley. Here she reads the story That Feeling, You Can Only Say What It Is In French and she can't go wrong. Not only is it a good story Becky Ann reads it with just the right empathy, feeling. It's the collections best story!

The third story in this collection is The Death of Jack Hamilton, which is nicely read by Arliss Howard. This story is almost like a non-fiction piece. It deals with the death of Jack Hamilton (as the title says) and since no one really knows exactly how he died it's certainly possible that it happened like King tells it here.

The last one is the collections title story, The Man in the Black Suit. It's read by read by John Cullum and he really does a good job sounding like the devil. It's certainly a hard role to portray with just your voice but he does it really nicely.

If you like audio editions of King's books (or of any books for that matter) you should get this one. If you don't like audio books: Give it a try! You might find that you like it after all. The Man in the Black Suit might just be the one you're looking for… 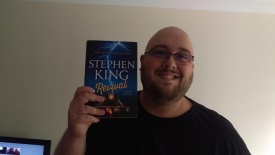