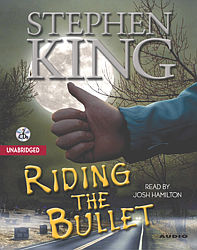 The one of you that have read my review of Everything's Eventual know that Riding the Bullet isn't my favorite short story by King and that I feel that it's a bit weak at the end. Personally I was expecting a more exciting finale then we get here.

In audio format the ending is still a bit weak but Josh Hamilton does a great job reading it. His voice is perfect for reading books and he gets these different nuances of the different characters. There isn't anything worse then when the reader uses the same voice for all the characters. My favorite voice is his version of George Staub. He really gets that creepy tone in his voice that you would expect from a fellow like Staub when he reads his lines. 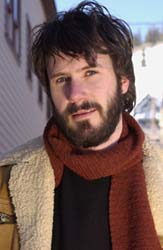 Riding the Bullet is the story of Alan Parker who is hitch hiking from the University of Maine to Lewiston, Maine where his mother lies in the hospital (the same one that King was on after his accident back in 1999) with a stroke.

On the way he get a ride with a man called George Staub. Fairly quick both Alan and we understand that there is something really wrong with Staub. He seams to know a lot about Alan and as they speed towards Lewiston he force Alan to make the hardest choice in his life, maybe the last one in his life…depending on his answer.

The story also includes a moral theme. Sometimes you have to make choices that are hard to make and you don't always know which is the right choice. Then when you have made your choice you always spend a great deal of time wondering if you choose the right one…

Riding the Bullet gets better and better for each time I hear/read it. I don't know if it's me that is a bit slow getting the point this time but the more I hear/read it the more I appreciate what King is trying to say in the ending. I still think it should have a more creepy ending but I'm starting to appreciate the dramatic ending more and more. So, my advice to you is; Don't miss this one!
Add or read comments 0 Comments
Close comments 0 Comments 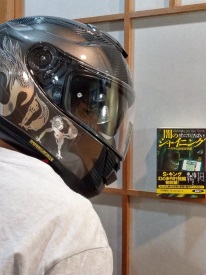