Entertainment Weekly has a great interview with King where he reveals there will be 2 new books next year and about his success on TV. Here are some highlights...

There will be two next year. I don't want people to get used to that or think that that's the norm. It's not. But it's just the way things happened. So there is another, but I don't want to say anything about it yet.

There's going to be a second season of The Outsider as soon as they can get the production going.

HBO hasn’t announced it yet but King know where it’s going...

I know exactly where it's going because I have seen some of the scripts. I could tell you, but then I'd have to kill you. I'll just say that it's really great and a real spooky paranormal element.

His thought about if If it Bleeds could be used as basis for a second season of The Outsider?

I don't think so. It's really complicated because of the difference in the two story lines makes it difficult to figure out how that could possibly be done in the world of Richard Price's creation of The Outsider. But if Mr. Mercedes was greenlit for a fourth season, that would be in the realm of possibility.

King on the new Flagg:

Alexander Skarsgard is a good Randall Flagg, he just knocked it out of the park

The new ending of The Stand:

I was able to bring things back around. I've had an idea for that final episode that I always kind of regretted not writing it in the book — the book's long enough as it is. I can't tell you anything about the episode other than to say that I've seen a rough cut of it, and I think it's fine. 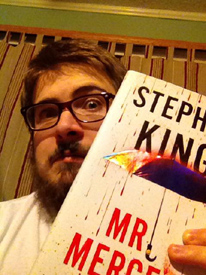