You Did It! You Sent Me To The US!

You sent me to the US! Back in the end of May I asked for your help in getting to the US and cover one of Stephen & Owen’s stop at their Sleeping Beauties tour. And man, did you ever! Today, July 19 (not even two months later) we’ve have reached the $2,000 I estimated that I would need to get there. So, with that I will consider the Send Lilja To The US! crowdfunding campaign a success. I will also remove the post about this from the top of the page (to give room for the latest news) but if you feel you still want to participate or read more about it you can do so here.

I took a chance and bought a ticket to the New York (now sold out) event when they were released so that is where I will be on September 26th. My plan is to report about it as much as I can on Lilja’s Library. Live if I can (if there is wifi) or as soon as I can if not. I won’t be doing anything live from the event though as they have a no camera policy that I want to respect.

I also hope to meet a lot of you while there. I want to talk to you about King and hear your thoughts on the event, say “Hi” and thank you for all your support during the 21 years Lilja’s Library has been online. Maybe do something for The Stephen King Podcast if any of you are up for it.

Last I want to thank every single one of you that helped me with this. It wouldn’t have been possible without you! From the bottom of my heart, Thanks! 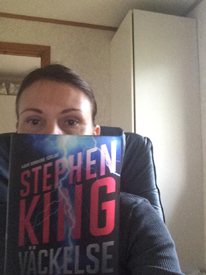