Josh Boone talks about The Stand in an new interview.


Now, as for The Stand, which has been in the works for quite some time, Boone explained, “We’re working on it. The reason The Stand hasn’t been made yet is because it’s expensive. It’s a problem of perception, I think. We really are attempting to revive the idea of the elevated horror film–movies like The Exorcist, Rosemary’s Baby, The Shining–A-list films with A-list casts. The 1980s really killed this idea because studios realized you could make horror films for dirt cheap and make a killing. In theory, every studio wants to make The Stand. It’s a bona fide American classic. It should be an event movie. A big, serious-minded epic with an awe-inspiring cast that is as faithful as possible to King’s narrative and intentions. This should be The Godfather of post-apocalyptic epics. I adapted the book and have King’s blessing. We got that awe-inspiring cast. But [Warner Bros.] didn’t want to spend what it would actually cost to make the movie. To have a real conversation about making this film at a level that is appropriate for the book King wrote is an 85- to-100-million-dollar conversation, which from where I’m sitting sounds like a no-brainer considering the mind-numbing nonsense that studios spend $250 million on. Which brings me back to that perception problem. They look at The Stand and wonder why they can’t make this post-apocalyptic horror movie for $35 million. King and I were most excited and continue to be most excited about a single three-hour event movie: The Godfather of post-apocalyptic movies.”

Does he have any studios in mind? “My hope is that we’ll go make that movie with Lionsgate,” Boone said. “My adaptation is incredibly faithful to King’s book, but the way I was able to contain all of it in a single three-hour film is: I shattered King’s structure and told the story non-linear. That was really what broke everything open for me. The opening scene is Mother Abigail on her deathbed sending our heroes off to make their stand against the Dark Man in Vegas, and then we jump back in time and you basically have three spinning timelines going the whole movie–Captain Trips, Boulder, and The Stand, same as the book, but they are all happening simultaneously. Sequences that fall hundreds of pages apart in the book stand side-by-side in the film, echoing and resonating in new and strange ways. I remain incredibly excited about that script. I can’t wait to make it. The Stand is the movie of a lifetime so I’m completely content waiting until someone gives us exactly what we need to do it right rather than to compromise.” 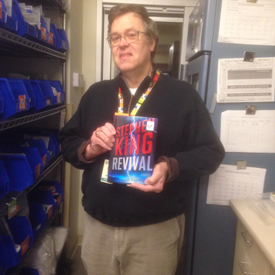