King comment on BTK's daughter's comments on A Good Marriage.


I don't think Mr. Rader's daughter has to worry about her father getting a big head; there's nothing glamorous about the portrayal of Bob Anderson in A GOOD MARRIAGE. He's depicted as a banal little man, and none of the murders are shown. As for making millions from the project…not going to happen. AGM is a very small, independently financed feature that is opening in less than two dozen venues. How it does as a video on demand feature film (VOD) is hard to predict, but we don't expect huge returns. The story isn't really about the killer husband at all, but about a brave and determined woman. And while I understand Ms. Rawson's distress, the BTK crimes have already been chronicled in no less than 4 feature films, and there may be more in the future. I grant there is a morbid interest in such crimes and such criminals--there have been at least a hundred films about Jack the Ripper, who claimed far fewer victims--but there's also a need to understand why they happen. That drive to understand is the basis of art, and that's what I strove for in A GOOD MARRIAGE. I maintain that the theme of both the novella and the movie--how some men are able to keep secrets from even their closest loved ones--is valid and deserves exploration.
- Stephen King 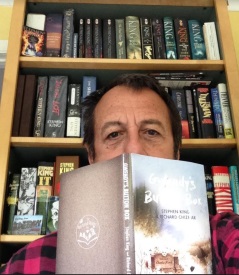