King in Bag of Bones?

Dread Central reports that two young actresses have joined the cast of A&E's four-hour adaptation of the Stephen King novel Bag of Bones from director Mick Garris: Caitlin Carmichael, who has credits in both "True Blood" and "Dexter", is playing Kyra Devore while local Canadian thespian Fiona Forsythe has signed on for an as yet unnamed character.

The real news though is talks about a Stephen King cameo in the project. This comes from one of the "higher ups" on the production – with the word being King would be playing a clergyman.

Bag of Bones continues to shoot in Nova Scotia with a wrap set for September 28th. 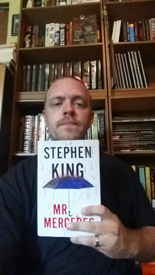