Christian Slater, Wes Bentley and Jeff Beesley all have something in common. All of them have however, had a hand in filming the movie Dolan's Cadillac in recent weeks. The movie, which has been filmed in Moose Jaw, Las Vegas and other areas of southern Saskatchewan is just finishing filming near Bethune.

Moose Jaw's Jeff Beesley is directing the film. He says it's been an honour to work with such a talented cast and crew including Wes Bentley and Christian Slater, who play the lead roles. “He (Christian Slater) came in for the first 12 days of production and you know there's a reason he Christian Slater, he's fantastic. There was a long history to this project, a lot of actors wanted to play his part Sylvester Stallone, Arnold Schwarzenegger, Dennis Hopper and none of them for one reason or another could do it. So to actually see it happen and see someone like Slater do it I think audiences are really going to be satisfied with what he does”.

We caught up with Beesley during filming north of Bethune yesterday. He says while most of his colleagues have moved to places they consider "greener pastures" ... he says he's really blessed to be able to stay in Moose Jaw, make films and be with friends and family. “It's my hometown and the place I still live and I have long said how great it is for the economy and for the fabric of the community to shoot films in Moose Jaw. Everyone welcomed us with open arms... and I mean the Montreal crew that came and the producers and everyone from all over the world were blown away with the locations we got in Moose Jaw”.

Beesley admits it can be a challenge filming a movie in Saskatchewan that's supposed to be set in Las Vegas, Nevada. “We have to be very strategic about how we do it and we have to work very closely with the art department and the director of photography to make sure it's shot appropriately. There's going to be some CGI in the movie obviously sometimes when we're getting into areas that are too flat we'll be putting in some mountains and there is 4 days of shooting in Las Vegas so we will be getting a lot of authentic locations spun throughout”.

Dolan's Cadillac is based on a Stephen King short story. It's about a man who seeks to avenge his wife's murder We asked Wes Bentley, who plays the lead role what he thinks about working with Beesley. “Jeff's terrible, I hate working with him. He makes everyday so hard”, Bentley laughed. “No, Jeff's a great guy, he's a hidden talent. He took a script that could have been a typical generic revenge movie but Jeff is not a generic man. He's got a beautiful mind and he made this a real joy to work on as well”.

In the film, Wes Bentley plays a man looking to avenge his wife's murder. That means killing a well-protected mob boss played by Christian Slater. No word when Dolan's Cadillac will be ready for theatrical release, but the hope is that it might appear at a film festival as early as next spring. 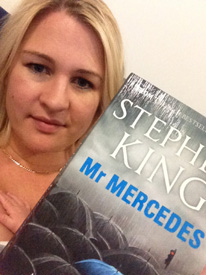