Dolan's Cadillac on the move

Shooting has begun on Dolan's Cadillac:


Shooting began earlier this week on Dolan's Cadillac in Regina and Moose Jaw, Canada. Based on the story by Stephen King, the cast includes Christian Slater, Wes Bentley and Emmanuelle Vaugier.

Contrary to an initial report that Erik Canuel at the wheel of this psychological thriller, director Jeff Beesley is now directing from a script by Richard Dooling.

"The audience is in for a treat," says executive producer Kevin DeWalt. "We've assembled an incredibly talented cast and a highly skilled crew and are ready to deliver a quality film that will exceed audience expectations." Ellen Wander, executive producer, adds, "The transition from page to screen will not disappoint. This story is one of vengeance, Stephen King style."

Here's an official synopsis provided to Shock by production entity Minds Eye Entertainment: Tom Robinson (Wes Bentley) is a peaceful, law-abiding schoolteacher until his wife Elizabeth (Emmanuelle Vaugier) accidentally witnesses a murder. Jimmy Dolan (Christian Slater), Las Vegas¹ most ruthless and untouchable mob boss, never leaves behind a witness. Haunted by the ghost of his wife, Robinson transforms himself into an obsessed vengeance machine, pushing himself beyond the breaking point of mind, body and spirit. When the two men finally meet deep in the heart of the desert, Dolan's Cadillac climaxes with an amazing test of wills the ultimate duel. The Cadillac, which has been Dolan's armor, may just as easily become his tomb. 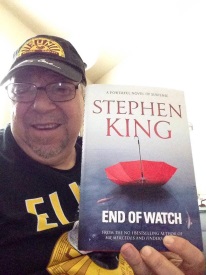