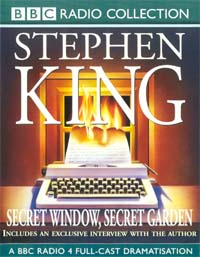 First, let me tell you that I'm no big listener of audio books. I usually read them in book form and don't listen to them from the stereo or my Walkman. Now and then there are some audio books made that are worth listening to though. Secret Window, Secret Garden is one of them.

What makes this one so unique, you might ask. Well for one thing, it's not just someone reading the book (not that that's necessarily is a bad thing); this is a dramatization of the book. This has been done before, I know. The Mist is one example, and the newly released version of Pet Sematary is another. This current release, from British BBC radio, might very well be the best one yet.

It's terrifically performed and the actors Henry Goodman (as Mort Rainey) and William Roberts (John Shooter) do a superb job. There are other actors and actresses as well but these two are the ones that have the two big parts of the story.

I have always been a bit skeptical about dramatizations, as they are so easy to screw up. The Mist is one dramatization that I'm not that fond of. The story is good, but there is too much noise in the background and that makes it a bit hard to follow the story. Thankfully, this is not the case with Secret Window, Secret Garden though, where there is just the right mix of actors, background noises and sound effects.

What the story itself is about I guess most of you know by now but for those of you that don't I'll tell you. Secret Window, Secret Garden tells the story of author Mort. One day he gets a visit from a man named Shooter. Shooter claims that he is the one who has written one of Mort's stories and that Mort has stolen it from him. Mort does everything he can to prove that this is wrong, without success. The more he tries, the more violent Shooter gets. [SPOILER ALERT! Skip to next paragraph if you don't want to know…!] After committing a murder (which he can pin Mort to), Shooter demands that Mort write another story, using Shooter's name as the author. That would make them even…

Secret Window, Secret Garden is one of my personal favorites among King's shorter works. It's a well-told story and its surprisingly twisted ending is just wonderful. The beauty of this dramatization is that they have succeeded in preserving King's voice in the story. It's still the same wonderful story that King tells in Four Past Midnight. Great Work!

As is this weren't enough enjoyment, we also get an interview with King at the end. It's an interview with Mark Lawson made back in 1998 when King visited the UK to promote Bag of Bones, and even though it's a bit out-of-date it's still an interesting interview. In it King says, among many other things, that he might be getting to the end of his career (something that hasn't happened yet), something that stirred up the King-fan-community quite badly at the time.

So, how do I best summarize my experiences of listening to Secret Window, Secret Garden? Well, it's easy: go out and get this audio dramatization now! It's a great story that has been dramatized in a very engaging way. You can't lose!

This audio dramatization has been in the making for quite some time. I know I first read about it approximately 2 years ago, then nothing happened, but now finally it's out. I don't know why it was delayed but I'm glad it's out now. I enjoyed all 1½-hours (about 2 hours if you include the interview) big time!!! 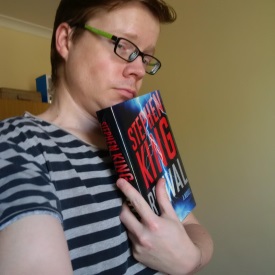