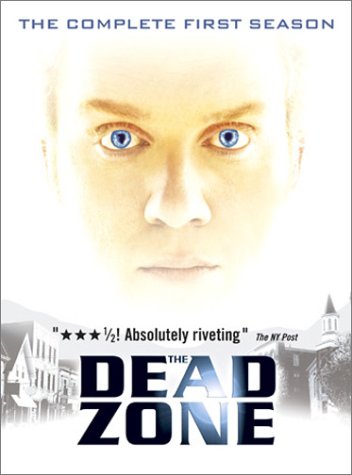 On June 17 the entire first season of The Dead Zone was released on DVD. I have taken a look at it and plan to chare my thoughts about it here with you if you're interested. Because I have already reviewed all the episodes when they aired on TV I won't get into the plot of the episodes. If you want to read my thoughts on that you can go back to the reviews and check them out. OK here we go!

First I want to confirm that all 13 episodes are here. There have been different reports about it on the web. Some have said that the pilot (already released on DVD) wouldn't be included. Well, I can now confirm that it is. There are 3 episodes on each of the first three DVD's (the set includes four DVD's) and the forth has four episodes.

There is quite a lot of extra material in the box and it's all really interesting. On each DVD (except number four) you have storyboards for some or all of the episodes. Here you can compare how the close to the script the finished scene is. You also have something called "Behind the scenes" on each DVD. They cover different things about the show on each DVD. The most interesting one has the title "Music and special effects". It's really nice to see how they do the scenes where things freeze on the screen and Johnny walks around among them. The other three behind the scenes has the titles "Genesis", "Writing" and " Guest Stars". In "Guest Stars" I get my dose of Sean Patrick Flanery who plays Stillson on the show. I have become a real fan of Sean Patrick after watching The Dead Zone. I remember seeing him in Young Indiana Jones and not really caring that much. No I find him a really good actor though! I'm not sure if it's because ha has become a better actor, if he has grown up a bit or if it's me but now I really like him.

Besides this there is also some promos for the first and second season.

When you buy this box you also get a second DVD (you have to send in a bounce-back card) that contains a never-before-seen pilot for the series… I haven't seen this one myself but it sounds really interesting. On the first DVD (that contained episode 1 and 2) there is an alternative ending but this sounds like there actually is a whole episode that never aired. It will be interesting to see.

So is this something you should get even though you have followed the series on TV and already seen all the episodes? Definitely! The Dead Zone is a classic and personally I think it will be remembered as one of the top King adaptations for a long time. Besides this you have all this extra material in the box that you don't want to miss. So, in other words, go out and get this box right now! 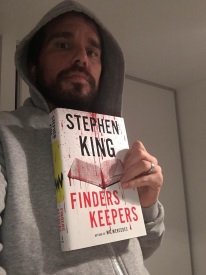