The show is over. And I'm happy with their way of ending it. I knew it would be different from the book and I'm totally okay with that. The only thing that I wish we would have seen more of is Jerome's sister Barbara. In the book she and her friends go to the concert that Brady is planning to attack. I wish we could have gotten to know her more. Oh, and there is one other thing I miss and that is Bill's “The Happy Slapper”. For those of you that haven't read the book it's a sock with coins in that he uses as a weapon and that is what Holly uses on Brady. Here she uses the dog statue and that is almost as good, almost.

Another thing they have left out is when Bill, Holly and Jerome go to Brady's cellar and work out his security system and by doing so find out what he is planning. I like those scenes and it made the trio tighter and showed them working together and you got an idea of what Brady’s security system was. That is unfortunately lost here. All in all though, they follow the main plot and everyone ends up where they should. Jerome is off to college, Holly gets her own place, Bill has his heart attack but is saved and the most important thing, he is convinced we haven't seen the last of Brady yet. And I'm so glad that Brady didn't open his eyes in that last scene. Now we don't know and I love it.

To summarize the entire 10 episode show I would actually go as far as saying that Mr Mercedes is my number 1 when it comes to TV shows based on King’s stories. The characters work exceptionally well. The scripts are well written and the actors play their parts excellent. There are some changes and some things that I miss from the book but I can live with that. It’s not a big issue and it doesn’t make the show less good. Now I'm ready for season 2 and I really hope we’ll get a 3 season series in the same style as Fargo where you have multiple seasons where each season is a standalone season but they still connect to each other by the characters and things that happens. I think that would work really well!

The show was great through all 10 episodes and the ending was a good one (very important) and the only thing I feel I need to add is that I love the music they use in the show and if you haven’t listen to the soundtrack yet, do it now! 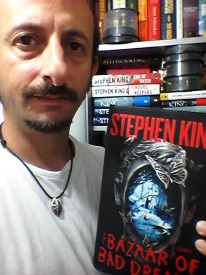