We’ve now seen more than half the season and this episode is just as good as the previous ones but there are two highlights that’s something extra to be found here. The first one is that we see Holly for the first time. Justine Lupe plays her really well and she acts just as strange as expected. Hodges likes her and she is soon warming up to him as well…after a rough start. Holly enters the story when Janey’s mother has a stroke and is taken to the hospital. Present at the hospital is also Janey’s sister (Holly’s mother) and her husband and there is a clear tension between Holly and her mother. The interaction between Bill and Holly is fairly short but it works well and they have a good chemistry.

Brady’s mother Deborah is trying to sober up but it’s a lot harder than she expected it to be. And it doesn’t help that Brady seems to want to keep her at home. Possibly even drunk. While Brady is at the interview for the position of manager of the store (the promotion he might be up for) we see what’s really happening in his brain. And it’s not nice things. Murder, death and a lot of blood. Let’s just say that the interview isn’t going as well as could have been expected.

Brady is still upset after the chat he and Bill had in the last episode and Brady has now decided it’s time for Bill to die. And a bomb will do the job. Brady has it all set until he makes the mistake of putting the bag with the bomb in his car. During her trying to sober up phase Debora takes the car to town to try and get her old job back bringing the bomb with her by misstake. But fear not. Brady hasn’t given up on his plan.

In this episode, Deborah gets to take a bit more space and that is a good move. We get to see her struggle with trying to get sober and how hard it can be. Kelly Lynch is as usual perfect in the role. The episode also gives us more background on Bill’s daughter and what happened when she was younger. How her and Bill’s relationship crashed and burned before they drifted apart. Now he’s doing his best to fix it though but so far, no luck.

Oh, and the other great thing that happens in this episode is that King has his cameo. A totally unexpected cameo. We did know he would show up but not in the context that he does. I won’t tell you where he is until the next review so you can see for yourself if you can spot him. Hint: there is a lot of blood.
Add or read comments 0 Comments
Close comments 0 Comments 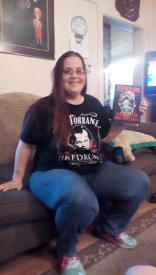