The season is over for The Mist. Now we have to wait and see if there will be a second. And even though the season has been a bit up and down…a bit too much down if you ask me, the ending gives me hope. During the episode, a lot happens. We get to see Kevin arrive at the mall and finding Adrian and beat the shit out of him. Sheriff Connor and Natalie arrives and Connor throws his son out of the mall on Natalie’s orders. Eve reveals that Connor is really Alex’s father and Bryan who isn’t Bryan meets a soldier who tells him he has to go with him, which he does.

Eve, Alex and Kevin are thrown out of the mall since Alex is accused of murder. With them they take the guy from the game store and Mia. Before they leave though Kevin drives the car through the doors to the mall letting the mist in and killing everyone inside. Except Connor who, on Alex’s request, joins them.

So, with that ending we are now where King’s story ended. Before the season there were speculations about whether the pilot would arrive here. It didn’t but now after 10 episodes we are here. We have one car with Kevin, Eve, Alex, Mia, Connor and the game store guy and we have another car with Bryan and the soldier and a hurt Adrian hiding in the back. They are all on the move.

I think it was a good move to get rid of a lot of the characters and scale it down to just a few. Now we have a few main characters and some that are expendable left that you can build a second season around. You have the survivors and you have those that (probably) are the reason for the mist. BUT even if the setting is good for a second season they need to address the issue with the mist itself. They can’t keep it as it is now. We did see it turn into some kind of mist-snake at the end when it tried to kill Alex and succeeded in killing Jay and that is a better version than what we have seen so far but please, no more horsemen or moths that gives men wings. We need scary not strange! 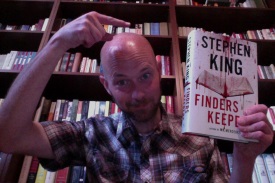