The fourth episode continues to be as good as the three previous! We know the characters now and Brady shows us again and again how bad he really is and it’s now clear that he will make life hard for Bill. Bill on the other hand finds out how Brady managed to get into Mrs. Trelawney’s Mercedes without breaking into it. Actually, it's Jerome who figures it out.

Bill also gets romantically involved with Janey (Mrs. Trelawney’s sister). By doing so and by showing some of their feelings publicly he makes his neighbor Ida jealous. This is something that we don't know how it will pan out because Ida doesn’t exist in the books. It could be something that will have an impact on the story or it could just be a side thing but we'll have to wait and see.

Kelly Lynch who plays Brady's mother is still doing a great job staggering around looking drunk. Well, in fact, the entire cast is doing well. The casting is perfect and they are all doing a fantastic job. Breeda Wool how plays Lou Linklatter who works with Brady at the Supreme Electronix also gets more time in this episode and we get a better feeling about her character.

One character that's still missing though is Holly. Four episodes in and she is nowhere to be found. Hopefully we’ll see her in episode five. She is an important part of the story and I can’t wait to see how Justine Lupe will portray her. Brady feels scarier for every episode. Mainly because he's a normal guy, or at least he looks like it on the outside. You might not see him for what he is until it's too late or maybe not at all. And that is what makes him so scary in my book. He could be any one of us and we’d have no clue.

I have a four-episode rule. That means I need to see four episodes of a show before deciding if it's unwatchable, bad, okay, good or really good. After four episodes Mr Mercedes is really good. In fact, I think it could be one of 2017 years King winners. And that's really impressive with all that is coming in this year. 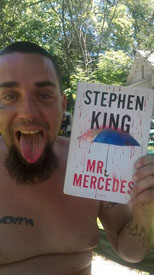