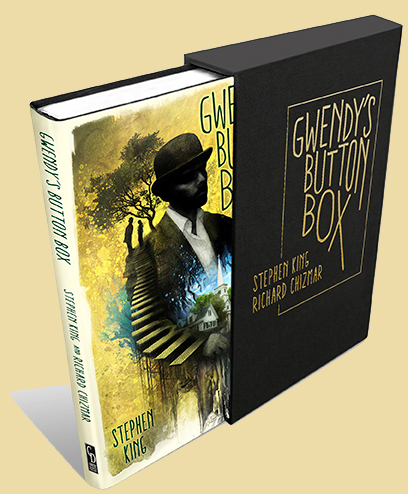 2017 could be called Stephen King’s collaboration year as both his books this year are collaborations with other authors. This, the first of 2017’s books (the other being Sleeping Beauties with his son Owen) is called Gwendy’s Button Box and tells the story about how Gwendy Peterson (Gwendy being a mix of Gwendolyn and Wendy) gets a very special box from a man she never meet before, Richard Farris (notice the initials…).

And the timing couldn’t be better. As a result of her being made fun of for being overweight, Gwendy runs up the “Suicide steps” each morning (at the top is where she meet Farris). The box he gives her produce small (but perfect) chocolate animals that, when she eats them, give her a feeling of fulfillment, a feeling that she doesn’t need to eat as much as she has been. That, in combination with exercise, makes her lose that extra weight. But that’s not all. In addition to the the chocolate the box also produces old, extremely rare silver dollars in perfect condition. As many as she wants.

So, all is well then? No! What kind of King/Chizmar book would it then be? The box also has several buttons (buttons that you press, not the once that you sew on clothes as I first thought when I heard the book’s title). And this is where it becomes scary. Each button has a different color and each color represent a continent. And if Gwendy were to press one of the buttons something really bad happens on the continent represented by that color. Then there is the red button that does whatever she wants and there is the black button…

I really enjoyed Gwendy’s Button Box and like Gwendy I kept thinking, “why did Farris give her the box? What is she supposed to do with it?” The answer is in the story that King and Chizmar tell us and I must say that they do a great job telling us. They work really well together and I couldn’t tell who wrote what parts of the book. And that is a good thing. Their respective voices mix well together and you can’t tell where one ends and the other starts, exactly as a collaboration is supposed to work.

The book is short. 167 pages and it only took me a couple of hours to read it. It left me wanting more but also happy that I could read the entire story in one sitting. A huge thanks to King and Chizmar for bringing us this story! You did good, very good!

I almost forgot, the story takes place in King’s fictional town of Castle Rock and there are a few Easter eggs for the knowledgeable King reader but the town itself doesn’t play a big part in the story.
Add or read comments 0 Comments
Close comments 0 Comments 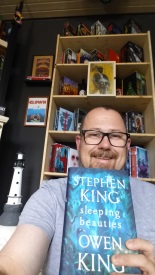