In the second episode of Haven we get to learn more about Audrey and Nathan and their relationship grows as she helps him investigate some very strange events in town. As we know by now it's not that strange that strange things happens in Haven but this seems strange even for Haven. Things are happening without anyone doing them. A stainless steel ball (from a statue) goes berserk and run down the local pub. Audrey finds out what it's like to be a butterfly. And this is just the beginning…

The stuff happening in the episode, titled Butterfly are very imaginative and the writer, Sam Ernst, has done his best to get us wondering what or who’s doing it. And he succeeds. In the end it's very clear who is doing it but until we get it in black and white it keeps us guessing...as I imagine Sam wants us to.

Something that did surprise me with episode #2 is that Duke Crocker (Eric Balfour) was nowhere to be seen. I thought he was one of the three main characters in the series and he can still be (all of them don't have to be in every episode) but I was surprised that he wasn't in this one as the series is new and all the characters are still being introduced.

Anyhow, I like the episode and it has potential. There are some references to The Colorado Kid but not much. I still suspect that it will be the backbone of the series and hope I’m correct. The viewers deserve to get some clues. Audrey is doing her best to find out who the woman in the photo is but so far no luck. The sheriff indicates that he's willing to help her though. But it has a price...

The script I read for episode #2 is written by Sam Ernst and like the others it starts of with a cast list, set list and a short note to the directors and cast. It’s like a pep talk very similar to the once athletics are seen doing standing in a ring before a bit event.

In this script we also get a very good example of what I mean when I say that scripts can have a lot of info that isn’t coming through to the viewers. The part I’m thinking of here is the description of Elvis, the man who meat Audrey and Nathan when they get to the statue from which the steel ball has gotten loose. When we see him on the screen he’s just a fellow Haven resident but when we read this description of him in the script he falls in a different light… “Elvis 55, mostly belly, takes a sex trip to Thailand every year)”. I bet you didn’t think that when you saw him, right?

So far Haven is on the right track. I think the series have a chance to be in for the long run but so far it’s still up in the air and the upcoming episodes will have to have the same high standard as these first two. And I'm feeling optimistic. 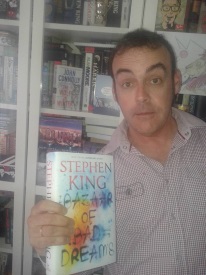