Haven is a new TV series loosely based on King's book The Colorado Kid and created by almost the same team that created The Dead Zone from King's book with the same name. The story of the pilot is quite different from the book though. Here the female lead character Audrey Parker (Stephanie McCann in the book) is an FBI agent instead of a news reporter. The books two leading men, Vince Teague and Dave Bowie are merely second hand characters in the TV series. Instead we focus on Audrey, one of the islands policemen, Nathan Wuornos, a fellow called Duke Crocker.

Haven isn't a regular town though and that is soon quite clear to both the viewer and Audrey who is there to investigate the death of an escaped convict. The weather is changing too often and without a logical reason for doing so. So, it's fair to say that there is something unusual with the town and the people living there.

I enjoyed the series quite a lot even though it's not really an adaptation of The Colorado Kid. However, after the pilot ends I get the feeling that the story from the book will be used as a backbone to the series and then new story plots will be presented in each episode, much like in the same way that the Stillson issue was the backbone of The Dead Zone series and then Johnny dealt with different events that all had a beginning, a middle and an ending in each episode.

The characters are all pretty good casted even though Vince and Dave don’t really look as I imagine when reading the book. Audrey and Nathan work well and so does Duke even though he probably needs one or two more episodes until we really know his place in the story. Right now he is just a citizen of many. I do however have the feeling that he will play a bigger part as the story moves forward.

The chemistry between Audrey and Nathan works perfectly. He can’t feel physical pain and she’s an orphan wanting nothing more than to find out about here past. She is from the city and he is a typical small-town cop. They are quite different but still complement each other very well. 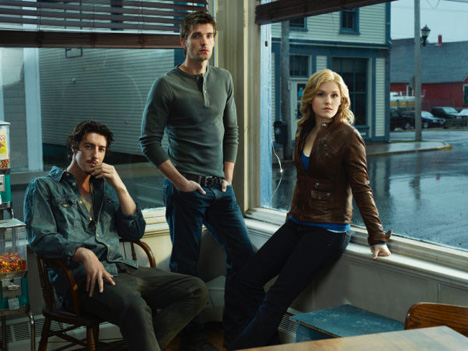 The “crime” in the pilot gets solved but what convinces Audrey to stay in Haven (if she didn’t the series wouldn’t be) is a photo with a woman that looks very much like Audrey on it. The photo was taken in connection with the Colorado Kid murder 27 years ago and Audrey is now determined to find out who the woman is. After all, it could be her mother. All in all Haven looks very promising. It got me curious to see what’ll happen and I like the characters. If treated right this can turn out to very good!

The good folks over at Haven have agreed to send me the scripts of each episode so that I can include some commentaries about it in my review of the episode. The script I got for episode one is the final shooting version and you wouldn’t think there are too many differences between that and the episode, right. Well, there aren’t but there is stuff in the script that you don’t notice when you watch the episode. Let me give you some examples…

In the script we find out that Audrey is in her 30’s and that Nathan is 32. Did you think about that when you watched the episode?

When Audrey is driving to Haven the script tells us that “she’s smart, funny, though and irrepressible herself in a million idiosyncratic ways”. Did you notice that?

Stuff like this is what’s makes it so fun to read a script. In between the lines we get details that aren’t voiced in the finished episode but only illustrated and easy to miss.

The pilot looks promising and I look forward to see what Audrey, Nathan and the rest of the characters will get involved in during the upcoming episodes. And as I said; if treated right this can be very good! And maybe we finally find out what really happened to the Colorado Kid?
Add or read comments 0 Comments
Close comments 0 Comments 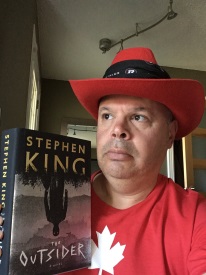