The Road of Trials #5 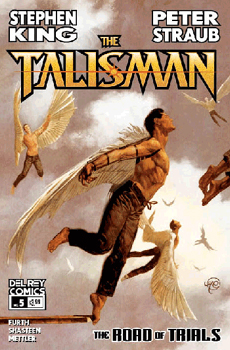 In the last issue of the first story arc of The Talisman we keep following Jack as he jumps between our world and the Territories. During his jumps he starts noticing though that things are happening, that his actions in one world are affecting the other. Like when he buries an apple core in the Territories it results in an earthquake in our world. Jack understands that he has to be careful or he’ll end up hurting a lot of innocent people.

He also gets to know the Territories better. He visits a market and he sees the flying men but the best is that he finally gets to meat Wolf. And I’m very happy to see that Tony Shasteen managed to capture Wolf in a very good way. Wolf is big, he is a little slow and he looks like Wolf. Unfortunately we don’t get to see him as a werewolf in this issue but we do get a taste of it in the promo for the next story arc and let me tell you, it looks very promising.

As a bonus in this issue we get to see how the flying men’s equipment would work if they existed in a very interesting sketch by Tony and also Robin Furth writes about the difficulties of finding the right look of Jacks father Philip Sawyer since he isn’t really described in the book.

All in all a very good issue and it leaves us with a promise of good things to come.

Lilja's final words about The Road of Trials #5

As said this concludes the first story arc, The Road of Trials and so far I’m satisfied with what I have seen. I also have high expectations of upcoming issues starting with issue #1 of the next arc, A Collision of Worlds out this summer. 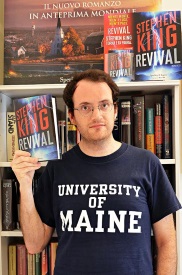