Wetware: On the Digital Frontline with Stephen King 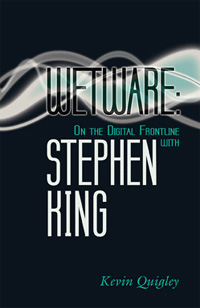 Not only is Kevin Quigley a good writer, he has also managed something that is almost impossible today in his book Wetware: On the Digital Frontline with Stephen King. He has managed to find an angle to King’s work that hasn’t been explored in a book already. He has found a subject for his book that feels new and unexplored. Wetware: On the Digital Frontline with Stephen King is about King’s online experiences from the first text based game (based on The Mist) to the latest Discordia that was released on King’s official site last year.

In chronological order Kevin takes us through each and every one of the online publications based on King’s work that has been made. He also discusses the effect they have had on King’s career but also to the industry at large. And even though the chapbook is fairly short (48 pages) Kevin manages to give us a good look on each of the publications.

The only downside to the book is that it’s too short. It’s an appetizer that makes you want to know more about the games, it makes you want to see what the Mist game looked like. And what did George Stark look like in the games based on The Dark Half? Personally I’ve had the fortune to have seen (and even tried) most of what he is describing but still. There is more info to be found here. Personally I’d love to see Kevin expand this chapbook to a full sized book with pictures, instructions for the games, interviews with the people behind them and on and on.

But for now this will do. I enjoyed Wetware: On the Digital Frontline with Stephen King and actually read it in one sitting.

Lilja's final words about Wetware: On the Digital Frontline with Stephen King

It’s both rare and intriguing when someone manages to find a new angle on King’s work as Kevin has done here. And it’s even more impressive to then manage to get it on print. Well done Kevin! 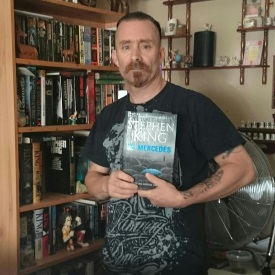