The Road of Trials #3 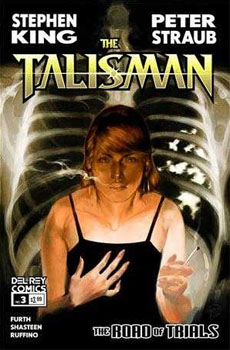 The third issue of The Talisman comics continue the saga about Jack and his journey. When we catch up with him this time he has just meet the evil Osmond who questions if Jack really are who he says he is. The issues really don’t move Jack forward that much. It’s more of an issue to show us how evil Osmond is. He shows it again and again and when one of his men accidently crashes with a delivery of Kingsland ale we really gets to see just how evil he can be.

This third issue is a pretty cruel issue with lots and lots of violent and when Jack leaves the castle through the woods we also get to see some of the evil that lurks in The Territories. Not only does the forest itself try to kill him, he also has to stay out of the way of Morgan’s diligence. The real journey for Jack has started and it’s now very clear that it’ll be a hard one.

As a bonus we get an interview with Tony Shasteen, the comic’s illustrator, and in it he talks about his work and thoughts on the comic. The only thing with this issue that I feel is wrong is the cover. It really don’t fin in with the story. It feels like it’s from a totally different story.

Lilja's final words about The Road of Trials #3

The Talisman keeps looking good but as I have said before, they might have to speed it up to get the entire story told before the comic is over. 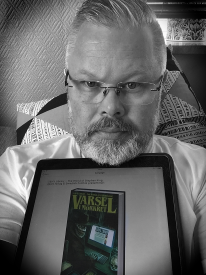