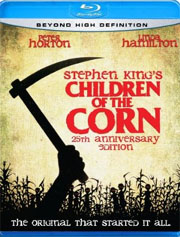 In Children of the Corn we get to meet Vicky and Burt that’s lost in the Nebraska corn fields. Well, not on the fields themselves but in a car driving through the cornfields. By mistake they run down a young boy that comes running out from the corn and while trying to save his live Burt notices that he’s gotten his through slit before he got up on the road. Shocked they decide to take him to the nearest town and alert the police. The nearest town though is Gatlin and there the local police can only be found out on the cornfield, nailed to a cross…

As it turns out the kids in Gatlin took over the town three years ago the killed everyone over the age 18. They are now running the town themselves under the supervision of Isaac, a childpreacher and his right hand Malachai. Since then no one over the age 18 is allowed to live. They must give themselves to “He who walks behind the rows”. Now two adults are entering the town for the first time in a long time... Isaac quickly seals their destiny by condemning them to death.

Children of the Corn was released way back in 1984 and what we get now is a 25 anniversary edition on blu-ray that has both old and new bonus feature. Stuff from the past and stuff just recorded. Personally I like it when older movies are dusted off and re-released in a nice edition. And even though 25 years hasn’t passed since I watched the movie the last time it’s close. I must however admit that the movie is better then I remembered. It’s not the best adaptation of a King story but it’s not as bad as I remembered. Probably it’s suffering from all the bad sequels that has been made since 1984.

You can’t deny that 25 years has passed since it was made but it’s still entertaining. Both Linda Hamilton and Peter Horton do quite a good job portraying Vicky and Burt. And John Franklin looks a lot scarier as Isaac then I remembered him. Both he and Malachai (Courtney Gains) do. The only really, really bad thing with the movie is the special effects. They are so bad I almost can’t watch them. Did they really think this was OK back in 1984? Amazing if they did...

Lilja's final words about Children of the Corn

If it’s been a while since you saw Children of the Corn it’s time. And don’t judge it based on all its sequels, OK? It deserves better than that. 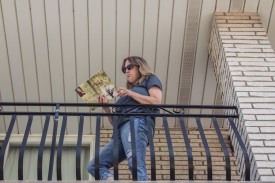