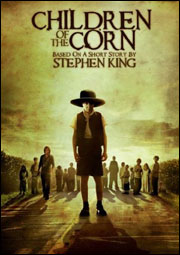 The new version of Children of the Corn is quite similar to the original to begin with but pretty soon it strays of on its on path. Unfortunately it’s not a good path it’s taking but back to that later on.

When the movie starts of we get to meet Vicky and Burt who are on their second honeymoon. Why is a mystery though since they bicker all the time. Vicky is a real pain in the ** and Burt is a bully who thinks he knows it all because he was in Vietnam. They are both very rude to each other and their bickering soon takes over the entire movie and all you do while watching wishing that they would stop and let the movie role on. And even though this part is a bit more true to King’s story then the original movie it’s still very annoying.

Kandyse McClure who plays Vicky never really makes the character work. As a viewer you don’t care whether she live or die, you just want her to shut up and that is sad. I guess they tried to make us feel for Vicky and Burt and we do the opposite.

Up until they hit the kid, who comes running from the cornfield, the movie is quite similar to the original but from here on it takes it own path. Now we get Burt who is some Rambo look alike that stands up to the kids and almost dare them to attack him. We get a kid leader, Isaac that looks like a mushroom with his way to big hat. I find myself screaming for John Franklin to return as Isaac. He wasn’t the best actor I’ve seen but compared to Preston Bailey he does a hell of a lot better.

The other kids, except Daniel Newman who plays Malachai, are so bad that I almost can’t stand to look at them. They can’t act and they don’t feel like they are invested in their roles at all. It’s almost like they have picked them up from the street the very same day the shooting started.

Where does that leave us then? Well, what we get is a remake that isn’t any better (well, maybe a tiny bit better) then all the sequels we’ve been getting since the first film was released. I had high hopes for this one but I’m afraid they were crushed along the way.

Lilja's final words about Children of the Corn

So, why isn’t this a great movie? It follows King’s story better than the original shouldn’t that mean that it’s a success? Not this time and personally I am convinced it’s because the bad acting we see in it. 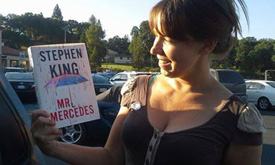