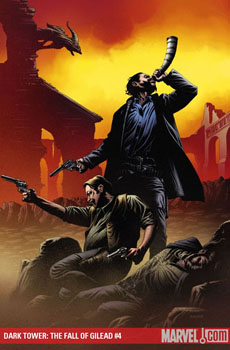 The fall of Gilead is upon us. It has started and we can only guess how it will all end. Judging from what happens in this issue it won’t end well for our friends. Farson is ready to attack Gilead and in a last desperate attempt to save both the town and his son Roland’s father Steven trusts a spy. A spy that, as it happens, isn’t working for Steven at all. He is one of Farson’s allied and Steve finds this out the hard way.

I feared that this issue would be a bit slow, waiting for the big finale in the next issue but it proved to be quite the opposite. Its action from page one and sets the mood for the last issue in the arc. My guess is that we’ll be seeing a lot of death, destruction and sorrow in the last issue and I can’t wait to get my hands on it.

As usual the illustrations, scripting and coloring is as nice as we have come to expect. The team is tight now and probably knows pretty well who should do what to get the best possible result.

The bonus material this time is an article by Robin Furth about other heroes named Roland and how they influenced here while working on the comic. We also get some black and white versions of pages from the issue and sketches of an alternative cover by David Lafuente that would have show characters from the books instead of those from the comic. Unfortunately they didn’t use that idea.

The issue ends with a sketch preview of things to come.

The story arc is getting close to its conclusion and it looks very promising. From what we have seen so far it looks like there will be a very action packed issue next time…full of death and destruction. 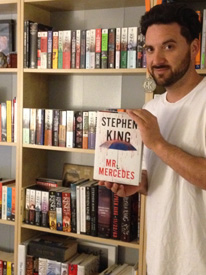