Walking The Mile - The Making Of 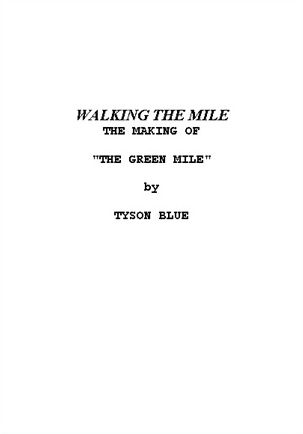 A book about the filming of a movie, can that be something worth reading? The answer is YES, at least if the book is Walking The Mile - The Making Of "The Green Mile" written by Tyson Blue.

When I first heard about this book I was a bit skeptical as to whether a book like this would be something special enough to grab my attention. I have, after all, read King's book and seen Darabont's movie several times. Could this book really add something?

Tyson has been following Darabont and his crew when they shot The Green Mile. He was with them on location at Hollywood Studios, he was on location in North Carolina, he was with them everywhere…and all the time he was taking notes and interviewing people connected to the movie.

One concern I had before I read the book was if I was going to understand all the movie-making terms that were destined to be in the book, not being a filmmaker myself. When I started to read the book I soon discovered that I had no reason to be worried. Tyson uses a minimum of those terms and when he does, he does it so well that you understand it without any problem.

The book begins at the beginning. Tyson starts with telling us about all the elements and people that is involved in the making of this film. He tells us how the company Castle Rock was founded, how Darabont got the rights to The Green Mile for $1 and that actor Berry Pepper first read for the role of Percy (he later got the part of Dean Stanton). He also has a big biography of everyone…and when I say everyone I mean everyone, it goes from the films star Tom Hanks to Mr. Jingles to the crew.

Throughout the book Tyson feeds us anecdotes from the filming. For example, the owner of the house they used to record the scenes at the Hammersmith's is owned by a man called Coffey, things like that.

We also get a complete run through of how a movie is done. We get to see how the effects for the movie is done, how the set is carefully arranged down to the smallest thing, how the actors and actresses had to learn to speak with an accent, what happened in postproduction, how the sound was added and so on.

To give you an example I can tell you that the sound you hear when the electricity flows through Old Sparky is in some scenes created with a mix of the following sounds; electricity, human screams, animal screams and vocalizations. How about that?

I was surprised to learn that a scene that, in the finished movie, might only be a minute long can takes days to record. Some scenes didn't even make it in to the finished version of the movie. Darabont did a lot of different version of the same scenes.

After Tyson's part of the book, which is about 370 manuscript pages, we get the story of another movie, called Wild Bill goes to Hollywood. This is a movie made by Sam Rockwell and Constantine Nasr that tells the story of how Wild Bill breaks out of the Green Mile and finds himself on a movie set in Hollywood. This was off course a joke but apparently a good one. Tyson tried to convince Darabont to add it to the DVD version of the movie. Unfortunately he didn't succeed.

And as if that wasn't enough to satisfy us we also get to read an essay by James Cole (maker of the first movie version of Last Rung on the Ladder) about how he spent 4 days on the set. James, like Tyson, is very good with words. It's almost as if you where on the set with them.

To end this review I will quote something Tyson says in the book. He explains, in a very insightful way, what makes an adaptation of a King book good or bad:

"Not "making a movie based on 'The Green Mile', but "bringing King's novel to the screen." Therein lies the real difference between the great King films and all the others."

Lilja's final words about Walking The Mile - The Making Of

This is a great book which everyone who enjoyed The Green Mile should read. And those of you that haven't seen the movie yet, get this book anyway, you won't regret it; one thing though, see the movie before you read the book! Otherwise you will spoil a lot of great movie-watching moments

Unfortunately there is no date for when this book will be released; we can only hope that it will be soon! When the book is finally released it will also contain more pictures, many which were not in the manuscript I read. These additional photos will make the experience even better! 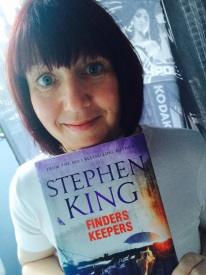