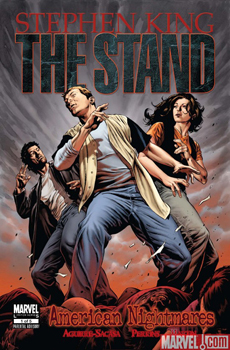 OK, we’re back on track. The Stand is back with the second story arc. This one has the title American Nightmares and will also stretch over five issues. In this issue most people are already dead and we get to see more of the survivors and how they say goodbye to their current lives and moves on to a new one. One that is greatly affected by what has happened and what will happen. The main characters in this issue is Nick, Larry, Frann and Stu but we also get to meet Harold Lauder for the first time and I must admit that I really like how he is portrayed. He looks just like he should, in my opinion.

This first issue is a strong start on the new story arc and if the rest keep this up it’ll be a joy to follow our characters in their quest for the good or the bad side. There is no sign of the good, in the shape of Mother Abigail, yet though. My guess though is that a lot more characters will show up as the issues are released and personally I can’t wait to see Mother Abigail, Trashcan Man and the others we all know from the book.

The illustrations and the coloring are, as usual, very good and the pages look very nice both in its illustrations and the overall look of it. This is something we are getting used to now but so far the team behind the comic has been able to keep the quality of the pages at this high point and my guess is that it will stay that way. There is nothing to indicate the opposite.

As a bonus we also get to see some sketches of some pages in this issue. It shows how the page has developed from the start to the finished version and it gives you an idea of what it takes to get it the way it is in the finished issue. We also get to hear Mike Perkins thoughts on inking and what techniques he is using.
To sum it up this is a very nice issue and a very good start for the new story arc. Everything we have come to expect is in there and I’m already looking forward to the next issue and hopefully more new characters. 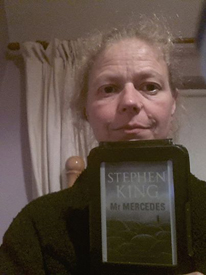