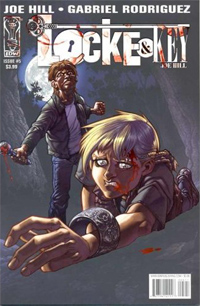 In issue #5, the second to last issue, things are getting heated. Sam reaches Lovecraft and manages to capture most of the Locke family. He demands Nina (mom in the family) to give him “the anywhere key” or he’ll kill the entire family. This is how issue #5 ends and we are left hanging, not knowing what’ll happen or who will survive.

Before this though we get to see more of Sam’s way to Lovecraft. He leaves a trail of dead bodies after him and each murder is more gruesome then the one before. It’s now very clear that the only thing that matters to him is to get “the anywhere key” to the echo in the wellhouse.

This echo is the same that Boyd has befriended. He is however starting to suspect that all is not what it seams with the echo. He starts to suspect that it’s not his echo at all but something totally different. Maybe something evil… This also becomes clear to Boyd when the echo emerge from the well and before he knows what hit him, sits beside him with it’s hands over his mouth.

As it should things are starting to heat up for the finale and I’m happy to see that everything is set up for a very intense and maybe gruesome finale. I doubt that any of the main characters will fall victim to Sam’s gun but then again, you never know. After all, the next issue is the last one.

Don’t worry though. The plan is to release two more segments; each containing six issues. In other words, this isn’t the end of the Locke family. 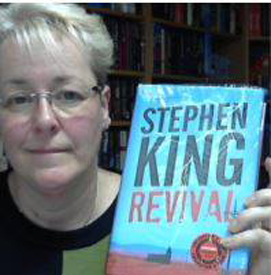