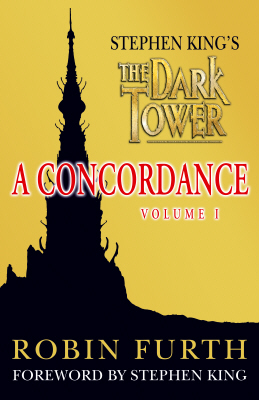 Stephen King's The Dark Tower Concordance Volume 1 must be one of the longest titles of a book in a very long time. I will therefore call it The Concordance from here on. Please don't let the long title scare you though. It's a really superb book if you're a Dark Tower fan like me that is. If you're not, this is probably not the book for you.

Originally The Concordance was done just for Stephen King himself. He where to use it when he wrote Wolves of the Calla, Song of Susannah and The Dark Tower to avoid errors when it came to peoples name and places. King did however feel that it was so good that he wanted the author Robin Furth to publish it.

If you have ever seen Stephen Spignesi's book The Stephen King Encyclopedia you know what kind of book this is. While Spignesi listed all the places, things and people of all King's books Furth do the same but with just The Dark Tower books. She takes it a bit Furth(er) though. She also lists languages, maps and holidays from the series. Since it was originally intended to be used only by King it is incredible detailed and has info about everything you could ever want…except the conclusion of the tale… This is (as the long title implies) the first volume. There will also be a volume 2 but that one won't be out until November 2004 when the last book is out.

So, this is a book to look things up in. It's not the type of book that you read from cover to cover even if you could do that as well if you want. I imagine that it's directed to the really hard-core King fans out there and not the average reader, event though they also could have use from it from time to time I imagine.

One thing that I found very nice about The Concordance is that Furth has separated the original Gunslinger and the revised one that was released earlier this year. She lists things from both editions with a comment that clears up what was in the original and what has been changed for the revised one. Good job!

What about negative things about The Concordance? Is there any? Well, there are some, even though they aren't big ones. Some pages looks like they are overcrowded with info, which makes them somewhat difficult to read. Maybe it's just me that isn't that use to read this type of books, I don't know but on some of the pages could have used a bit more space between the lines if you ask me. I was also hoping for a bit more maps. As it is now there are only 3 and that isn't much considering all the placed Roland and his ka-tet has been to in the first four volumes.

Another thing that I hope for is that when both volumes 1 and 2 have been released that there will be a single volume. Why? You might ask. Well, I imagine that there will be a great deal of things, places and people that appear in both, say, book 3 and 6. Will they then be mentioned in both volumes or just in one? Will you have to first look in volume 1 and the volume 2 to get the whole story since not anything from books 5 - 7 are revealed in volume 1? Lot's of questions and I guess we'll have to wait and see. What's certain is that volume 1 is out now and a second volume will be out in November 2004.

Oh, one last thing. If you haven't read the first four parts in the series you should read them before you read The Concordance. Otherwise things might be spoiled for you…and we don't want that to happen, do we? 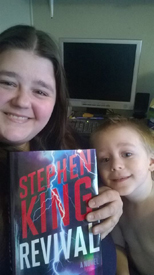