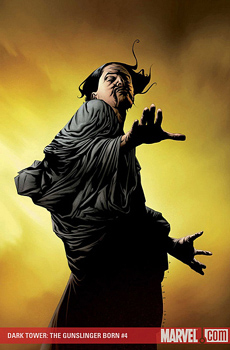 Issue #4 of The Gunslinger Born is soon here. I have just finished it and here is what I think of it.

As usual it’s a very good issue, well scripted, well drawn, well colored and well lettered. It shouldn’t come as a surprise for anyone that issue #4 continues where issue #3 ended. The entire series is as one long issue divided into smaller issues. It will be very interesting to read it all as one story in the omnibus edition later this year.

So, in other words we start of with Roland and Susan meeting again after they meet at Mayor Thorin’s house. There Roland was rather hard and judging of Susan and now he get the chance to apologize.

We also get to see when the boys ride out to Eyebolt Canyon and get a first look at the thinny there. We get to see Roy Depape backtrack the boys to find out who they are and why they are there.

And, we get to se more of Walter O’Dim who is a very frightening being. He looks a little the vampire Barlow from Salem’s Lot but more evil. This time he’s plotting against the boys…

As usual the coloring is excellent and the feeling that Jae, Richard, Peter and Robin has done the best issue so far is right here. Just doing that for the forth time is very impressive in my book.

The history lesson is called The Laughing Mirror part 1 and is about how a man is divided into three boxes, a thoughtbox, a heartbox and a ki´box. It also tells the story of how Maerly came to be and how he is to blame for the fall of the guards of The Dark Tower.

And as this wasn’t enough we also get to see how a page is done all the way from the script to the finished page. I love stuff like this! We also get part 2 of the panel discussion from Comic Con.

Issue #4 is like the first three issues extremely pleasant to look at Jae and Richard has done an extremely good job. The story plot keeps impressing me again and again. The translation from book to comic has turned out a lot better then I dared to hope for. In other words; make sure you get a copy of issue #4 the second it’s released.
Add or read comments 0 Comments
Close comments 0 Comments 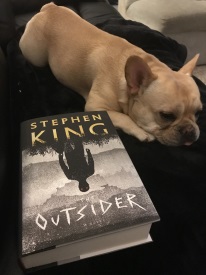