And with that said; over to this reviews episodes.

Dance of the Dead by Tobe Hooper
Dance of the Dead is Tobe Hoper’s episode of Masters of Horror and it’s a rather classical horror movie but also a critical look at USA. After a third world war has taken place the world is an inferno. Cities have been destroyed and people are living on the streets.

In the middle of this we find Peggy who lives in the secure environment of a coffee shop that she runs with her mother. She really has no idea of how the world works today but one day a boy from the streets gets her to leave the safety of the coffee shop and follow him out on the streets…

Once she is out there she learns the hard way that the world has moved on and that noting is like she remembers it. The #1 entertainment is something called Dance of the Dead. And the Dance of the Dead is just what it sounds like, dead people that dance. MC, very nicely played by Robert Englund resurrect dead girls that then get electric shocks to make them twitch until they fall down dead again…entertainment deluxe…

Pick Me Up by Larry Cohen
Pick Me Up is a movie about two serial murders who’s paths by accidentally crosses each other out in the middle of nowhere. In the nowhere a buss has broken down and the passengers are about to become an easy pray for the villains.

Both men are clearly psychopaths and very sadistic. They have no sympathy for their victims what so ever. In the middle of all this death and chaos one passenger seams to walk away unaware of all that is going on though. Unfortunately Stacia is about to find out…the hard way.

When I watched this episode I get the same feeling I get when watching the old Friday the 13th movies. A madman and a bunch of kids being slaughtered. The difference here though is that the madman doesn’t look like a monster…

And, to my happiness, the ending is totally unexpected. I love it.

Haeckel's Tale by John McNaughton
In Haeckel's Tale we meet young Ernst Haeckel who is obsessed with bringing the dead back to life. One night on his way to his father’s deathbed when he needs to seek shelter for the night, he does so with an old man and his young wife. As it turns out the wife still loves his ex husband, in face she is still meeting him to have sex. The only problem is that he is dead…

This episode is full of special effects, some not the best but most are quite good. The zombie’s makeup is nicely done except the infants which could be a bit better. It looks a bit to much like a melted doll... The actors are all unknown (to me) but are still delivering what’s expected of them.

It feels like this episode is very influenced of Romero’s zombie movies. I’m not sure it’s as good as Romero’s but it’s definitely worth checking out and as an episode in Masters of Horror it’s right at home.

As usual with the Masters of Horror episodes we get loads of extra material. Here we get interviews, “behind the scenes” and “the making of a scene” and more. So, what ever you do, don’t miss these last episodes (or the earlier once for that matter) of season 1. Oh, and season 2 premiers next month in the US… 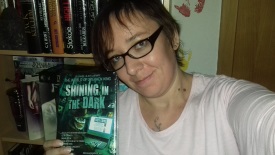