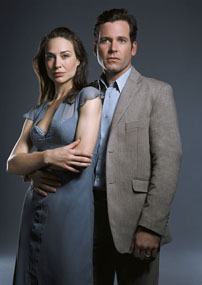 So, the first two episodes of Nightmares & Dreamscapes are set to air this Wednesday. First out is Crouch End and Battleground. Both episodes are very good but my favorite this week is Battleground but lets start with Crouch End since that one is on first.

Here we get to meet Lonnie and Doris (played by Eion Bailey and Claire Forlani) who are in London and by a set of coincident are set to attend a dinner part at a friend’s house in Crouch End. Already when they try to get a cab to take them there they find out that there is something special and frightening about Crouch End. But as it often is in horror movies they, despite all the warnings, go there.

As they arrive they discover they have lost the address and while they phone the friend to get it again they also loose their cab. Stranded they try to find their way back by foot. As they get more and more lost stranger and stranger things are starting to happen and before long they find themselves lost in a another dimension…

Both Bailey and Forlani does a good job with their parts, especially Bailey is very believable as he is getting stranger and stranger. A strong episode that has kept King’s feeling from the written story very well. 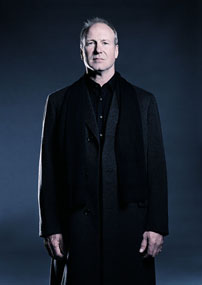 Battleground is a very good episode…even one of the best in the entire series. Before I saw it I thought to myself that it would either be very good or very bad. This is that kind of story that can’t be done semi good. Either all the toy soldiers would look pretty silly or they would awesome. They look awesome!

Battleground tells the story about professional hit man John Renshaw (perfectly played by William Hurt) who after killing a CEO of a toy company receives a strange package. The package contains a complete set of toy soldiers…that’s pissed!

Hurt plays the role extremely well. It can’t have been easy to act against not exciting toy soldiers but he pulls it of brilliantly.

Another very effective thing about this episode is that there is no dialogue in the entire episode. No one says a word! This may sound like something negative when I say it here but please believe me when I say that the effect it has on the story is phenomenal! 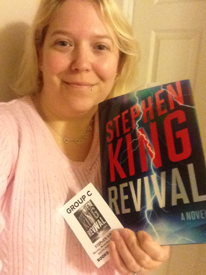