I just finished Blue November Storms by Brian Freeman who is also known for his books trivia book about Stephen King, The Illustrated Stephen King Trivia Book (which is why I review his book here in “Almost King”) and I must say that I’m impressed.

When the book starts of you directly feel the inspiration King’s Dreamcatcher must have had. In Blue November Storms, like in Dreamcatcher, you got a bunch of friends that have known each other from when they where children. They all shared an event, as children that really tied them together, also just like the kids in Dreamcatcher.

The friends have a cabin in the woods where they go to hunt from time to time, also as in Dreamcatcher. As you can see the references to King’s book is huge and what you at first are tempted to believe is a recap of King’s book quickly develops to it’s own story.

When you get behind all these likenesses you quickly see that Brian has crafted his own story, and a very well told story it is. It all beings with one of the friends, Steve, getting a phone call from another of the friends, Adam, (who that the rest has assumed been dead for a long time). Adam tells the others he wants to meet them and make a visit to the cabin.

They all join in but while they are at the cabin a big meteor storm collides with earth and terrible things start to happen. The animals in the forest start getting smarter…and hungrier. This is the beginning of a cat and mouse game that can only end in disaster…

Brian has done a good job in telling the story but there are some weaknesses in it. The first and biggest one is that we don’t get a good explanation to why Adam faked his death (he says that he couldn’t take it but that seams a bit week…) and why is he returning now? Why does he want to go to the cabin, is it a coincident? Also, the event that lead up to him faking his death is just mentioned in the passing and not explained fully… Well, it’s explained but to quickly if you ask me.

Get Blue November Storms, read it and enjoy. I had a really good time reading it. 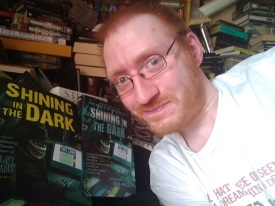