I first read something that Steward O’Nan had written when I read Faithful that he co-authored with Stephen King and I liked what I read. I liked his style so much that I decided to try one of his own books. It ended up being The Night Country, which I don’t regret.

The Night Country is about three teenagers that return from the dead on Halloween, one year after they died in a car accident as well as the relatives to the once that died and the once that didn’t. In the car that faithful night was Danielle, Marco and Toe who all died in the crash. But they where not alone. In the car with them were also Tim and Kyle. Both Tim and Kyle survive, Tim uninjured but Kyle damaged for life. He got injured so badly that he can’t do the simplest things anymore and needs help with everything.

Now, one year after the crash, Tim plans to re-live the crash but this time, he doesn’t plan on surviving.

The nice and unusual thing about The Night Country is that it’s told largely from the “ghost’s” point of view. They are always present when someone is thinking about them, invisible and unable to interfere they have to watch and listen to the living whether they want to or not.

Even though this is a ghost story it’s not a scary one. The ghost is more like ordinary characters in the story like any of the living once. I really like this technique that Stewart uses when he tells the story. It’s unusual and fresh, at least in my mind.

The book is perfect to start of your Stuart O’Nan reading career with, as it’s fairly short, just over 200 pages, and a pretty easy read.

As I said this is the only book I have read by Stewart O’Nan but if the others are as good as this one my guess is that he’ll be around for a long time. In other words, go get it! 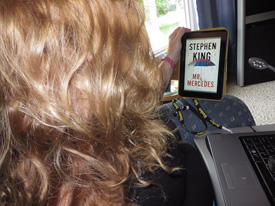