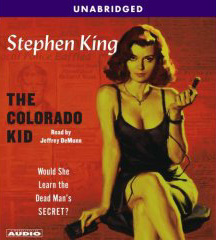 After finishing The Colorado Kid for a second time (this time on audio) I can only repeat what I said after reading the book the first time; it’s one of the best books King has written. I know many of you think it’s a bit slow but I don’t. I think it’s King’s way of setting the mood of the book. It is a slow moving story and this second time I surprise myself with having answers to many of the questions (or at least I think so) while listening.

After King stated that the fact that he wrote in a Starbucks Coffeeshop before (time wise) there where any as a clue…my imagination runs even wilder. Did the Colorado Kid arrive from The Gunslinger’s world through a door? Or was it a thinny? Or was the explanation just King’s way to disguise a mistake?

Well, it really doesn’t matter. It has gotten my imagination running wild. What if The Colorado Kid is connected to The Dark Tower saga? Will he be in the comics that are released next year? Will King do another short story about The Dark Tower and The Colorado Kid? As before that really doesn’t matter, I see a lot of possibilities while listening to the book. And I love every second of it!

There is only a small problem with the audio version of The Colorado Kid and that is the narrator, Jeffrey DeMunn’s accent. While trying to give the characters as a believable voice as possible he over does it a bit. The accent gets so thick from time to time that it’s sometimes a bit hard to hear what he is saying. You can understand it but you have to concentrate a bit extra from time to time. It’s a nice accent though. He sounds like a mix of Bubba in Forest Gump and Sean Connery. Very smooth.

So, the best thing you can do is go out and get The Colorado Kid ASAP. Then listen to it, it’s only about 4 hours long so you’ll have it done in an after noon…and you won’t regret it, take my word for it! 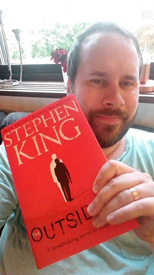