On Writing: A Memoir of the Craft 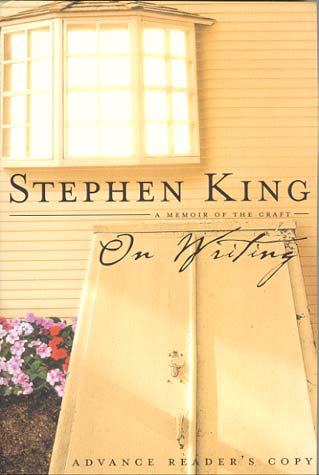 Finally it was time for King's second non-fiction book, On Writing: A Memoir of the Craft. To be really honest I was a bit nervous and skeptical about it. Why? Well, to be honest I didn't like the first one, Danse Macabre, all that much.

When it comes to King's writing I prefer the fiction over the non-fiction, which I think many of his fans do, although not all. Of course I do read the non-fiction stuff as well, but not with the same eagerness as I do with his fiction. Danse Macabre dealt rather much with what King liked to read and watch, stuff I haven't read or seen myself, which makes the book less interesting to me. Actually Danse Macabre is the only book by King I had a hard time getting through. I guess this is why I was worried at first that On Writing: A Memoir of the Craft was going to be another non-fiction book.

Then at the end of last year, when you could download an excerpt from On Writing: A Memoir of the Craft I instantly calmed down. What I read could best be described as a bibliography, and what a bibliography!

What we get here is an extremely open and honest overview of King's life. It really feels like King is telling us all there is to tell. King also tells us that he now has been clean for about 12 years, and I'm extremely happy for him!

After this strong opening the book turns weak though. We now get an English Grammar lecture from King about verbs and adjectives. Even though I probably need it I feel it gets tiresome to read. I'm not a writer myself (and probably never will be) so this doesn't appeal to me much, and I just felt that this part of the book was hard to get through. While I was reading this section, I felt I wanted to know more about King's childhood instead; I wanted more of the stuff from the first part.

When the Grammar are done it's followed by more writing tips. This part is more interesting though. Here King tells us about how he wrote specific books, and this is very interesting to know. Among the things he talks about is how Misery was done. This part is a real joy to read. I love getting some background on King's work. Unfortunately this part of the book is a bit heavy as was the Grammar section. When King talks about writing in general it gets a bit uninteresting to me, probably also because I'm not a writer myself. It becomes a bit like reading an instruction book about a thing you don't have!

When you get thorough this part of the book (which isn't all that bad, but a bit too long for me), you do get rewarded. Now comes a chapter in which King tells about his accident last year. For the first time you get all the information you read in the papers confirmed or denied. King tells us how he, after the accident, came to and saw Bryan Smith sitting on a rock, looking at him like if he was looking at a TV show. King also tells us how he thought he would die in the helicopter when he couldn't breathe because of the punctured lung. Like in the book's first part I feel that King is very open and honest when he tells us about the accident. It feels like he tells it exactly the way it was, and you really feel for him!

Lilja's final words about On Writing: A Memoir of the Craft

If you're a big King fan this book is a must read! (Even if you're not a writer yourself...)

If you're a sporadic King reader who only likes King's fiction, then this might not be the book for you. You don't have anything else to read? Well, then, give it a try, you can always give it up if you don't like it, right? You might actually end up enjoying his non-fiction work. However, if you only like books like IT and The Stand you might want to try something else… [but you'd be missing out!]
Add or read comments 0 Comments
Close comments 0 Comments 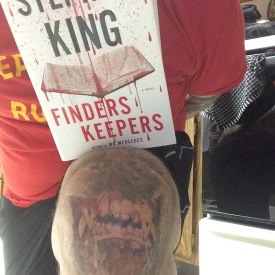