Under the Dome Renewed for Second Season

Hollywood Reporter reports that Under the Dome has been renewed for a second season. What is your thoughts on that? Would you have prefered a solution this season or are you happy to get more? Comment below.


CBS will return Under the Dome

The network has renewed the summer drama about a town encapsulated by a mysterious dome for a second season, CBS announced Monday at the Television Critics Association's summer press tour. The drama will return with another batch of 13 episodes in summer 2014.

The drama, an adaptation of Stephen King's best-seller of the same name, hails from Steven Spielberg's Amblin Entertainment, CBS Television Studios and DreamWorks Television and was picked up straight to series after initially being developed for CBS corporate sibling Showtime.

"We're excited to tell more stories about the mystery of the dome and the secrets in Chester's Mill, and are thrilled to have the master storyteller himself, Stephen King, tell the first one of next season," CBS Entertainment president Nina Tassler said in a statement announcing the news.

The series from showrunner Neal Baer (ER) and executive producer Brian K. Vaughan (Lost, Y: The Last Man) opened to a summer best June 24 at 10 p.m. The series drew a 3.2 rating in the advertiser-coveted adults 18-49 demographic according to Fast National numbers, tying it with Fox's The Following for the second-highest-rated drama premiere of the 2012-13 season; and its 13.1 million total viewers was the biggest audience for a drama launch in the past year. The series premiere ranked as CBS' most-watched summer debut since 2000 (Big Brother) and its highest-rated since 2005 (Fire Me Please). The series is averaging 13.84 million viewers and a 3.5 among adults 18-49.

When factoring in DVR data, the bow for Dome jumped to a 4.3 in the demo and 16.7 million total viewers -- impressive given its competition for the night included the final game of the Stanley Cup Finals. During its second week, the series lost a bit of steam, scoring a 2.8 in the demo (down 15 percent) and 11.5 million total viewers. It's third week continued the strong viewership, dropping only two points from its second week and easily topping all other original broadcasts for the night.

CBS struck an early content licensing deal with Amazon, giving Amazon Prime members unlimited access to the serialized drama four days after the network broadcast. (CBS has also been airing repeats of the episodes on Sundays at 9 p.m.; the rebroadcast of the premiere collected more than 5 million viewers and tied for second in the demo with a 1.0.)

The Amazon arrangement helps the network offset the cost of launching a pricey serialized original drama -- generally something the networks reserve for the fall -- in the typically low-rated summer months. Sources tell THR that the drama comes with a $3 million-per-episode price tag and has already been licensed in 200 international markets.

Dome is the key component of CBS' push toward year-round scripted programming, which also includes the second season of Unforgettable. The Poppy Montgomery drama was resurrected from the dead with an order for an abbreviated summer run. The push at CBS comes a year after the network saw its reality offerings fail to register last summer.

For their part, producers Baer and Vaughan have been vocal about stretching the series from what many early on considered a closed-ended 13-episode order. Baer, whose previous series ER and Law & Order: SVU have both run for 15 seasons, joked that he hoped Dome would follow the same trajectory. Vaughan, meanwhile, also is eyeing another abbreviated summer run for the drama. The producers, with King's blessing and guidance, plan to stretch the 1,000-page-plus book beyond the time span featured in the author's source material.

"When we first started talking to Stephen, we came up with the idea of the town potentially being trapped for years at a time, and that's something that [King said] you guys could get to do that I didn't," Vaughan told reporters ahead of the premiere, noting it might necessitate a different ending to the series. "We pitched Stephen a far-out, big-swing idea for this to go several years -- a different ending -- and he was really excited by it."

Meanwhile, diehard fans of the book have complained about the departures producers have made from the novel -- with King defending the changes in a post on his website. "Many of the changes wrought by Brian K. Vaughan and his team of writers have been of necessity, and I approved of them wholeheartedly," he wrote. "Some have been occasioned by their plan to keep the dome in place over Chester's Mill for months instead of little more than a week, as is the case in the book. Other story modifications are slotting into place because the writers have completely reimagined the source of the dome."

For Spielberg, the Dome renewal means he'll have at least two series on the air next year. TNT recently renewed Falling Skies for a fourth season (due in summer 2014) and ABC is launching freshman lottery drama Lucky 7 in the fall. 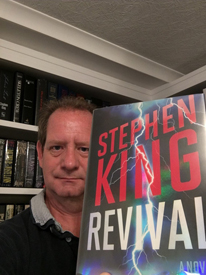