Damon Lindelof: I shouldn't be the one to adapt it

This was in USA Today :


I am actually curious as to the status of Damon's involvement with the Dark Tower series. Is there hope for us Stephen King fans that this project is in the works? -- Lorrie Q.

You'll be hard-pressed to find a huger fan of The Dark Tower than me, but that's probably the reason that I shouldn't be the one to adapt it. After working six years on Lost, the last thing I want to do is spend the next seven years adapting one of my favorite books of all time. I'm such a massive Stephen King fan that I'm terrified of screwing it up.

I'd do anything to see those movies written by someone else. My guess is they will get made because they're so incredible. But not by me. 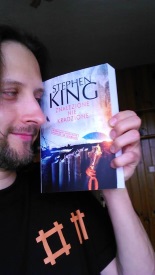